Actor Shaheer Sheikh And Ruchikaa Kapoor Are Married: "Off On An Adventure Called Forever" 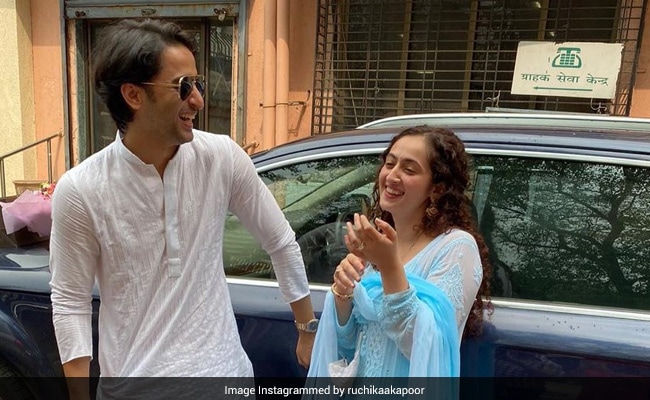 If you are wondering why actor Shaheer Sheikh and Ruchikaa Kapoor are trending, it's because their wedding announcement has taken fans by surprise. Shaheer Sheikh and Ruchikaa Kapoor, who recently revealed the engagement news in a social media post, had a court marriage recently, after which they flew to Shaheer's hometown Jammu. As per reports, the couple also had a small celebration at Ruchikaa's residence in Mumbai and are looking forward to a traditional wedding ceremony in June 2021. On Friday afternoon, Ruchikaa Kapoor made it official with a loved-up photo and this caption: "Off on an adventure called forever." Ruchikaa Kapoor is the creative producer and executive vice president at Balaji Motion Pictures.

Speaking to Bombay Times in an interview, Shaheer Sheikh described Ruchikaa as the "right companion": "Ruchikaa is honest when it comes to her feelings. The best part about our relationship is that we are friends first. Being an actor, I have to pretend in front of the camera all the time, but I have found a partner with whom I get to be myself. I've always said that I'm a 'wanderer' and I've finally found the right companion. I am looking forward to my never-ending travels with her."

Earlier this week, Shaheer Sheikh dropped the engagement news with this post: "Excited for the rest of my life."