Actor Mukesh Khanna's Sister Dies, A Day After His Own Death Rumours 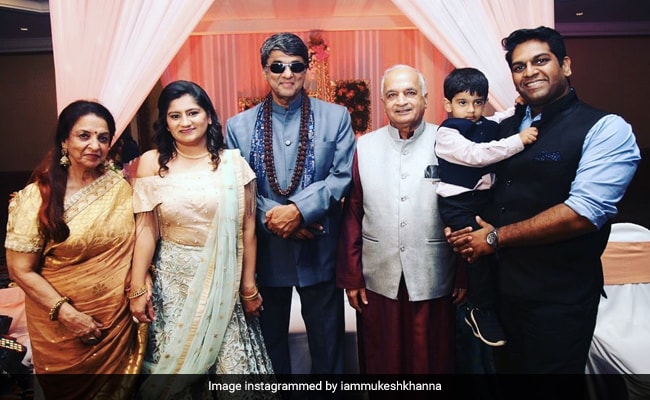 TV actor Mukesh Khanna, who recently shared a social media post quashing the rumours about his death, on Wednesday, lost his sister due to post COVID-19 complications. In an emotional social media post, Mukesh Khanna shared that his sister Kamal Kapoor has died due to lung congestion after recovering from COVID-19, in Delhi. He shared a family picture that featured him with his late sister, and his other relatives on Instagram and wrote: " Kal ghanto main meri maut ki jhoothi khabar ka sach bataane ka sangharsh karta raha , lekin mujhe pata nahi tha ki ek bhayankar sach mere upar mandra raha hai. Aaj meri eiklauti badi behen Kamal Kapoor ka dilli mei nidhan ho gaya (Yesterday, I struggled for hours to tell the truth about the false news of my death , but I didn't know that a terrible truth is hovering over me. My only elder sister Kamal Kapoor passed away in Delhi today)."

He further shared that he feels "shaken for the first time," in his life and expressed sadness over his sister's death. "Unke nidhan se kaafi marmahat hun. 12 din mei COVID ko haraane ke baad lungs ke congestion se vo haar gayin. Pata nahi upar vaala kya hisaab kitaab kar raha hai. Sach much mai pehli baar zindagi mei hil gaya hu (I am very saddened due to her death. After defeating COVID-19 in 12 days, she got defeated by lung congestion. I don't understand god's calculations. I am really shaken for the first time in my life)," he wrote. Fans of the Shakitmaan actor, commented on the post and offered condolences. A fan wrote: "Condolences sir! Stay strong," while others dropped folded hand emojis in the comments section of the post.

This comes a day after he quashed the rumours about his death. On Tuesday, Mukesh Khanna had shared a video of himself on social media where he stated that he is "perfectly alright." In the caption of his post, Mukesh refuted rumours of him being admitted to a hospital due to COVID-19. "With blessings of you all, I am healthy and safe. Neither I have COVID-19 nor was I admitted to any hospital," he wrote.

Mukesh Khanna is known for his work in TV shows. He is best known for his role of the superhero Shaktimaan in the TV show Shaktimaan. He also played the role of Bhishma Pitamah in BR Chopra's Mahabharat.