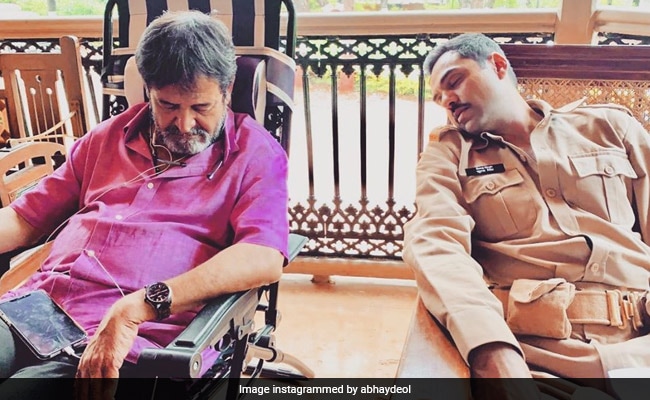 Actor Abhay Deol, who has a reputation for sharing cheeky posts on Instagram, did it again - the actor took his Instafam by surprise and then cracked them up and how. Abhay Deol, who is currently shooting for a Hotstar web-series, captioned his latest Instagram post with a confession of sorts: "I finally did it. I slept with my director. On set with Mahesh Manjrekar." Hold on before you think otherwise and take a look at how Abhay Deol hilariously explained his caption with an ROFL photo, in which both he and Mahesh Manjrekar can be seen dozing away to glory on the sets of what appears to be the web-show. Oh, Abhay Deol also added this to his caption: "I'm a hotstar."

Shared on Wednesday evening, Abhay Deol's post sent his Instafam into a frenzy, who can't stop commenting on his post with the LOL emojis. Bipasha Basu was one of the first ones to drop a comment, who emptied her stash of the ROFL emojis on the photo. More from Abhay Deol's Instagram posted comments like: "Clearly men don't cuddle!", "casting chair", "sleeping beauties, in between duties" and more.

I finally did it. I slept with my director. On set with Mahesh Manjrekar. I'm a @hotstar.

Earlier, Abhay Deol trended a great deal for his posts on why he is often missing in action and why one should stop complaining about life. Take a look at them here:

Found this online. Illustrates very well a question I get asked by the people and the press all the time. "Why do we not see you more often on the big screen?" It's a loaded question, one I cannot answer in short. Maybe one day I will write a book about it. But then, I've already raked up enough trouble over the years, a book might land too many punches! But for all of you who want more let me tell you that I have 3 films in post production and I'm starting 2 more. As the great Lenny Kravitz once sang, "it ain't over till it's over." #playthegame

Meanwhile, not much is known about the Mahesh Manjrekar-directed Hotstar web-series but it is said to be the most expensive project of the streaming site. This year, Abhay Deol featured in Netflix film Chopsticks, which remains his last movie so far. Abhay Deol is best known for his roles in films such as Dev.D, Zindagi Na Milegi Dobara, Oye Lucky! Lucky Oye! and Manorama Six Feet Under.