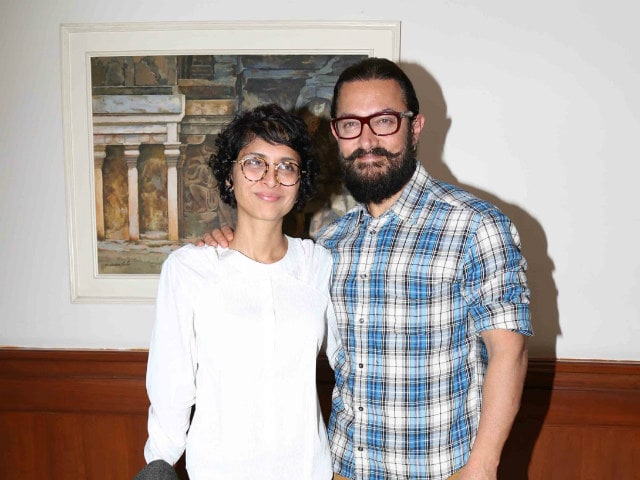 New Delhi: Dangal done. Celebrations done. Actor Aamir Khan is now busy with the next edition of his widely popular TV show Satyamev Jayate, which will feature episodes on the water crisis in Maharashtra. Meanwhile, Aamir, who is also well-known for thinking out-of-the-box, imposed a 'diktat' of sorts on wife Kiran Rao and she loved it. What is happening, guys? Well, Kiran was asked to sing in aid of Satyamev Jayate's Water Cup edition, and she obeyed, reported PTI. "I was nervous in the studio," said Kiran, who sang a Marathi number for a video directed by Nagraj Manjule - the filmmaker, whose resume includes National Award Winning-Marathi film Sairat.

Kiran equated the nature of Aamir's request with that of a decree and described the 51-year-old actor's decision as 'diktat', reported PTI. The Marathi song has been composed by musician duo Ajay-Atul. "I was made to sing the song on my husband's diktat. I with Ajay-Atul and Nagraj. I was nervous in the studio but Ajay and Atul encouraged me to sing," Kiran told reporters in Mumbai, said PTI. Ajay-Atul have composed for 2012 film Agneepath.

Filmmaker Kiran Rao co-owns an NGO with Aamir - Paani Foundation, which has a major contribution to the execution of Aamir's initiative. Kiran has directed Aamir in 2010 film Dhobi Ghat and co-produced films like Peepli Live and Delhi Belly. Talking about working with the Sairat director, Kiran confessed that it was a "dream-come-true" experience for her, and she only has Aamir to thank for it. "It was my dream to work with Nagraj. In an interview too I was asked is there any director I want to work with and I said Nagraj. My dream came true so I have to thank my husband," Kiran told PTI.

Aamir Khan was also enquired about Kiran's new role and this is what he had to say: "I always felt Kiran sings really well. She sits in the balcony in evening and sings for me so I thought everyone should listen to her voice," Aamir told PTI.

The song has been written by Guru Thakur and features snippets of rural Maharashtra along with Aamir, and other actors from the Marathi film industry. The first edition of Satyamev Jayate Water Cup is designed to focus on three districts, and one taluka each within those districts while the second aims to extend the watershed management programme to more areas.

Satyamev Jayate's Water Cup initiative is designed as a competition between villages, that will be involved in water conservation activities, with prize money of Rs 50 lakh. The duration of the competition is from April 8 to May 22.

Promoted
Listen to the latest songs, only on JioSaavn.com
Aamir and Kiran recently celebrated their wedding anniversary away from the din and bustle of city life on the New Year weekend. They hosted a few friends and team Dangal at a farmhouse in Panchgani for a few days. Kiran and Aamir were also spotted chilling with their children and Aamir's Dangal co-stars Fatima Sana Shaikh and Sanya Malhotra in the hill station. Kiran Rao, 43, and Aamir Khan, 51, married in 2005 and are parents to five-year-old son Azad.

Aamir Khan's Dangal released to rave reviews from critics and cine-goers alike on December 23 and has made almost Rs 300 crores at the box office.  (With inputs from PTI)