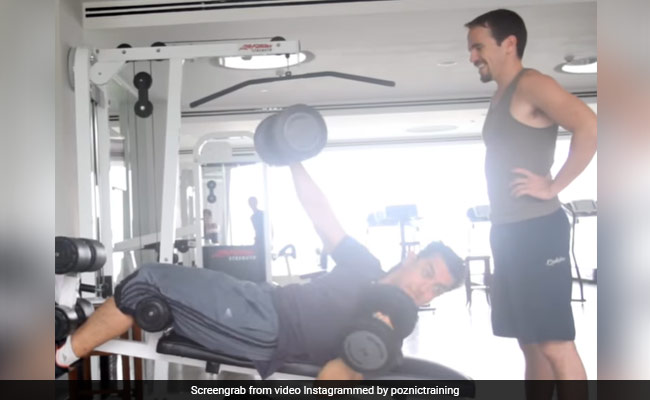 Aamir Khan in a still from the video. (Image courtesy: poznictraining)

Want to know how Aamir Khan transformed for his role as a professional acrobat in his 2013 film Dhoom 3? By practicing suspended alternating dumbbell press. How do we know this? Well, on Tuesday, Aamir Khan's daughter Ira posted an old video of the actor working out in the gym with his personal trainer for his 2013 film and her reaction is priceless. Sharing the video on her Instagram story, Ira Khan wrote: "What is that exercise!?" In the video, Aamir Khan can be seen doing intense core workout. His trainer, who also helped the actor prepare for his role in PK, shared the throwback video on Tuesday with this caption: "This exercise is just TOO good for rocking the core on chest day while also working on functional strength. It's very much a 'work out like an acrobat' kind of exercise, so I had Aamir do it regularly during our film prep for his role as a professional acrobat in Dhoom 3."

"One added benefit of this exercise is that while the full version is performed with a straight back (as you see in the second half of this video), as you build your way upto that kind of core strength, you can simply allow your back to bend forward a bit as you see Aamir doing in the first half. Flexing the spine like this perhaps isn't quite as pretty, but will certainly still give you a hell of a workout and has no risk of injuring the lower back (which can happen if you try to go too low too fast and can't hold length through your lumbar spine)," read another excerpt from the trainer's post.

Check out Ira Khan's reaction to the throwback video of Aamir Khan here: Now take a look at the video here:

Dhoom 3, which featured Aamir Khan in the lead role, also starred Katrina Kaif and Uday Chopra. Abhishek and Uday reprised their roles as ACP Jai Dixit and Ali, respectively, from the first two parts of the film. Aamir Khan played a double role in Dhoom 3.

Aamir Khan is currently busy filming Laal Singh Chaddha. The actor and his ex-wife Kiran Rao have been working on the film together in Jammu and Kashmir currently.