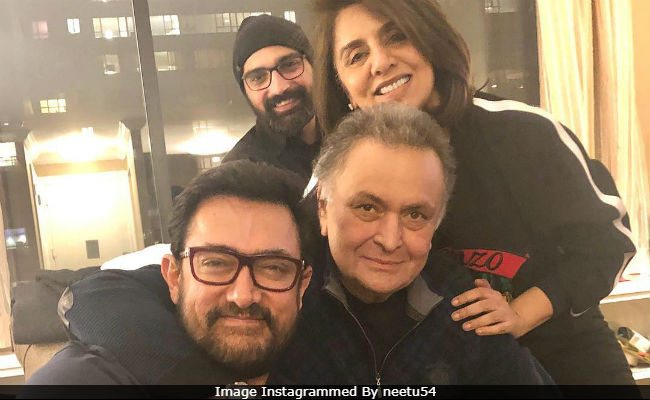 Rishi and Neetu Kapoor recently hosted Aamir Khan in New York, where the couple are currently staying. A picture from their meeting has been shared by Neetu Kapoor on Instagram and she captioned it, "It's not how many hours one spends with a person, it's how much you give in that time. Aamir gave so much and more - Love, respect, warmth and laughter. He is a true superstar." Rishi and Neetu Kapoor moved to the US in September last year for the 66-year-old veteran actor's medical treatment, but what exactly he's being treated for has not been disclosed yet. Rishi Kapoor and Aamir Khan have co-starred in 2006's Fanaa. 1993's Damini, in which Aamir had a cameo, was their first film together.

Take a look at the picture Neetu Kapoor posted.

Before Aamir Khan, actress Priyanka Chopra also caught up with Rishi and Neetu Kapoor in the Big Apple and so did Sonali Bendre, who was undergoing cancer treatment there. Sonali's filmmaker husband Goldie Behl and sister-in-law Srishti Behl Arya also accompanied her.

Neetu Kapoor and Sonali Bendre were invited to Priyanka Chopra's bridal shower too.

Meanwhile, Alia Bhatt, whom Ranbir Kapoor (Rishi and Neetu Kapoor's son) is rumoured to be dating, celebrated New Year's with the family. Riddhima, along with her husband Bharat Sahni and daughter Samara, also joined her parents in New York.

Last month, Rishi Kapoor opened up about his health conditions and told Bollywood Hungama, "My treatment is on, hopefully I will recover soon and God willing I will return. The procedure is long and tedious and one needs immense patience which unfortunately is not one of my virtue."