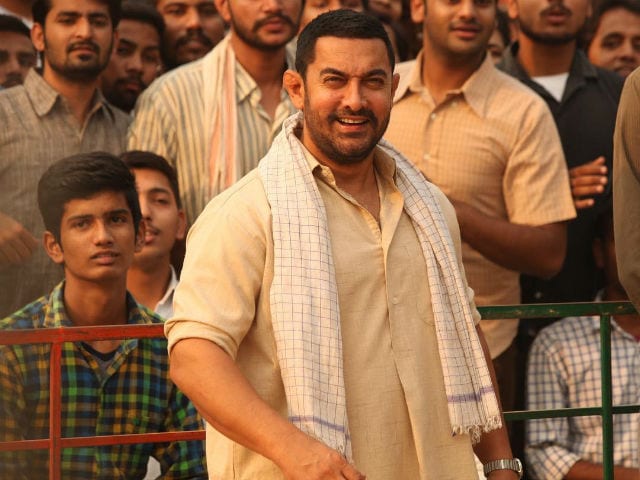 New Delhi: Bollywood superstar Aamir Khan who is high on Dangal's success, says he doesn't think he rules the box office, reports news agency IANS. "I am not a box office king. I am only Kiran's (his wife Kiran Rao) king," said Aamir. The actor's last film Dangal, has collected over Rs 385 crore at the box office. The sports biopic released on December 23 and since then, has been ruling the box office. Speaking at Dangal's success party, Aamir said that he never chooses films on its potential to do business. "Till today I never signed a film on the basis of its capability to do business. I prefer to choose a film from my heart. All the films I've done till now are those which touched my heart," IANS quoted the 51-year-old actor as saying.

"Taare Zameen Par, 3 Idiots, Rang De Basanti or Sarfarosh, when I did those films, I never thought they would do such a good business. If you take Dangal as an example, I played a role of an aged and heavy wrestler. There are no romantic songs or any typical formula to become a blockbuster. Therefore, we never predicted that the film would be such a big hit," Aamir added.

Dangal features Aamir as a Haryanvi wrestler Mahavir Singh Phogat, who against all odd trained his daughters Geeta and Babita to become wrestlers. Ahead of the film's release, Dangal received rave reviews and was defined as Aamir's best film so far.

The film fetched Aamir Filmfare Best Actor Award. He told IANS, that for him, the most respectable award is his audience's love. "Other than this, I do not think about any other awards."

Aamir also spoke about the recent attack of a mob on the sets of Padmavati in Jaipur. He termed the attack on filmmaker Sanjay Bhansali as "unfortunate". He told IANS, "Taking law in our own hand is not legal for anyone. What has happened is very wrong and saddening. The people of Rajasthan are very much lovable and sensible. My experience with the people and the place was very good."

Promoted
Listen to the latest songs, only on JioSaavn.com
After Dangal, Aamir will now be seen in Thugs Of Hindostan, co-starring Amitabh Bachchan.