A Sridevi Memory From Khushi Kapoor's Album. "The Coolest," She Captioned This

In the old picture, Sridevi can be seen sporting a black outfit, which she paired with a striped shawl and a pair of shades 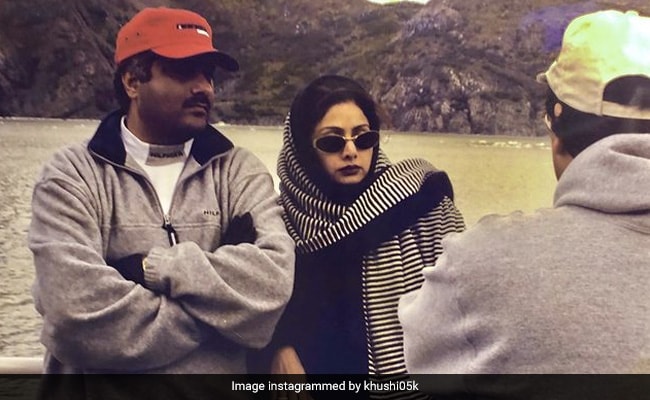 Boney Kapoor and late actress Sridevi's youngest daughter Khushi Kapoor dedicated her latest post on Instagram to them. On Monday, Khushi posted a throwback photo of her parents from their family album and wrote "the coolest" in her caption. In the old picture, Sridevi can be seen sporting a black outfit, which she paired with a striped shawl and a pair of shades. Standing next to her, filmmaker Boney Kapoor looks cool in a grey sweater and a red cap in the photo. Boney Kapoor and Sridevi married on June 2 in 1996 and welcomed their daughter Janhvi, who is now an actress, the following year. Khushi was born in 2000.

Sridevi died on February 22 in 2018 by accidentally drowning in a hotel bathtub in Dubai, where she was attending the wedding festivities of nephew Mohit Marwah. Her last film was MOM.

On Mother's Day this year, Khushi Kapoor picked two photos of herself and Sridevi from her childhood. Her emotional caption read: "Happy Mother's Day to the best."

Just like her sister, Khushi Kapoor will soon make her debut in Bollywood. In an interview with Bombay Times earlier this year, Boney Kapoor: "Yes, Khushi is also keen on acting. You will hear an announcement soon. I have the resources, but I would rather have someone else launch her because I am her father and one tends to get indulgent. You can't afford to do that as a filmmaker and nor is it good for the actor. Anil (Kapoor) was still an established actor, so it didn't affect him much, but I think I became an indulgent brother with Sanjay (Kapoor) when he made his entry into films."

Janhvi Kapoor made her debut in Bollywood with the 2018 film Dhadak. She has featured in films and series like Ghost Stories, Roohi Afza and Gunjan Saxena: The Kargil Girl.