"Pilates and barre helped my body change for the better pre and through my pregnancy," wrote Kajal 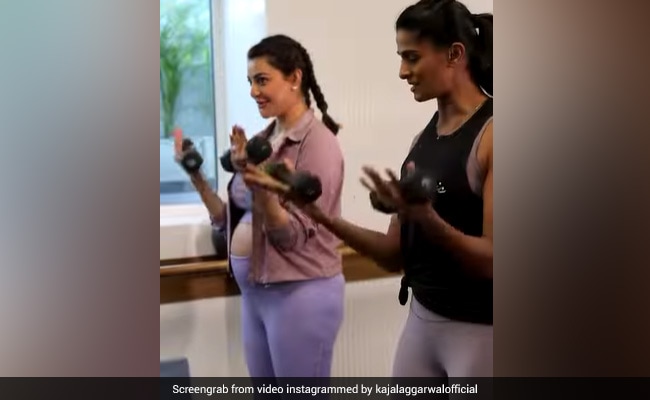 Kajal Aggarwal in a still from the video. (courtesy: kajalaggarwalofficial)

Singham star Kajal Aggarwal, who is expecting her first child with husband Gautam Kitchlu, shared a video from her Pilates session on Monday. Kajal, who has addressed the issue of body shaming in one of her previous Instagram posts, can be seen working out along with her fitness trainer in the video. Along with the video, she wrote a caption that read, "I have always been a very active person and worked out my whole life. Pregnancy is a different ball game! All women who are pregnant without complications should be encouraged to participate in aerobic and strength conditioning exercises as part of a healthy lifestyle during their pregnancy ."

The actress added in her post, "Pilates and barre helped my body change for the better pre and through my pregnancy. This transformative approach has me feeling stronger, longer and leaner. The goal of aerobic conditioning in pregnancy should be to maintain a good fitness level throughout without trying to reach peak fitness. "

Earlier this month, the actress shared an extensive note addressing those trolling her for the changes in her body during pregnancy. An excerpt from Kajal's post on body image shaming read, "I've been dealing with the most amazing new developments in my life, my body, my home and most importantly my work place. Additionally, certain comments/ body shaming messages/ memes don't really help. Let's learn to be kind and if that's too hard, maybe, just live and let live."

Kajal Aggarwal has actively been sharing posts from her "mommy training" (her words). She captioned a post: "Learning about strengths you didn't know you had and dealing with fears you never knew existed."

Kajal Aggarwal, who stepped into the Hindi film industry with Kyun! Ho Gaya Na, is best-known for her performances in films such as Singham, co-starring Ajay Devgn, Special 26, opposite Akshay Kumar and Do Lafzon Ki Kahani. She has also been a part of several Tamil and Telugu films. Her upcoming projects include Acharya, Mosagallu, Hey Sinamika, Paris Paris and Kamal Haasan's Indian 2.