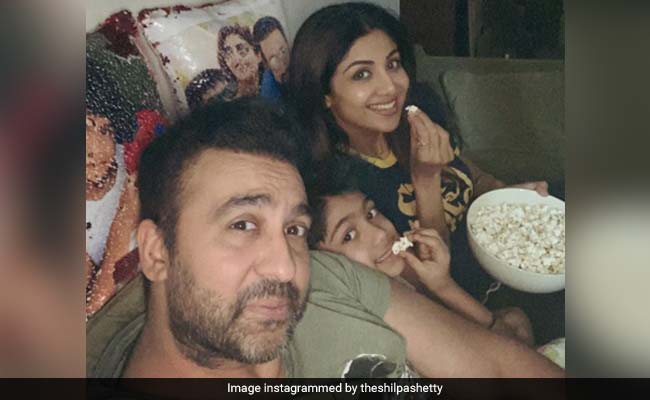 Shilpa Shetty's family time with husband Raj Kundra and son Viaan is just too much fun. The 44-year-old actress grabbed a permanent spot on the trends list on Monday with her video featuring Raj and Viaan. Shilpa, who keeps cracking up her Instafam with her ROFL TikTok videos, shared her version of "modern-day Mahabharat" and it is just too good. In the video, 7-year-old Viaan features as the vedic sage Narada while Raj and Shilpa feature as "Daddy ji" and "Mummy ji." Narada was known for carrying information from one person to another, often causing misunderstanding that led to fights. In the beginning of the video, Viaan goes and tells dad Raj that mama Shilpa has called him "mota." Reacting to the comment, Raj tells Viaan to go and tell Shilpa that she is "lazy." Eventually, both Raj and Shilpa gear up to fight with each other. The video then features animated clouds and lightning. Then, in a hilarious turn of events, they find out that it was Narada Viaan who was trying to make them fight. Shilpa shared the hilarious video and wrote, "Daddyji aur Mummyji ke beech jung ched ke humaare Bete ji ne Sunday ka funda badal diya! Isiliye, our modern-day Mahabharat has modern-day problems and modern-day shastra." Take a look:

Shilpa, Raj and Viaan, in coronavirus lockdown, are spending a lot of quality time together. A few days ago, they had a "perfect movie night" accompanied by "hot homemade popcorns." Take a look:

Shilpa got married to Raj in November, 2009. They welcomed their son Viaan in 2012. The couple welcomed their daughter Samisha in 2020, via surrogacy.

On the work front, Shilpa Shetty is making a comeback to films after 13 years with Sabbir Khan's Nikamma.