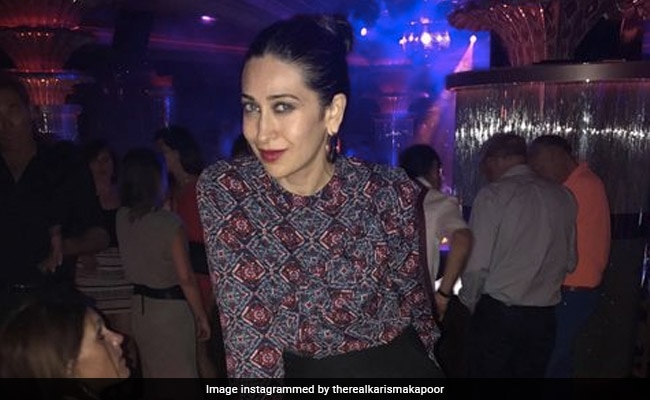 Please don't disturb, Karisma Kapoor. She is in a “disco daydream”. No, we aren't making such claims. It is her latest Instagram update. The actress has shared a picture of herself looking uber-chic in a turtle neck top and black bottom. Along with the snap, which is clicked inside a club, Karisma wrote, “ I am in a disco daydream.” She has also added a mirror ball emoji to it. The pic became an instant hit on the social media platform. A fan wrote, “Sure, a head turner even now.” Another said, “Gorgeous as always.”

Karisma Kapoor's social media game is too good. Remember the time when the actress was “feeling like a snac?” Karisma dropped a series of pictures standing against a food truck and said, “Feeling like a snac'. Here, Karisma is wearing a white crop top and baggy jeans. Replying to the post, Karisma's BFF Amrita Arora said, “Looking like one.” Actress Anushka Sharma spoke for all of us when she wrote, “Always a stunner.” Karisma's cousin Zahan Kapoor said, “Stop it. For a second, I legit thought this was an archive shot. Looking 25.”

Karisma Kapoor then made our day by sharing an “October rain” montage. It perfectly captures the various moods of Karisma. In the background, we can hear the song, Koi Ladki Hai, from her 90s classic Dil Toh Pagal Hai. For the caption, she picked lines from the track. It read, “Oh saawan raja, kaha se aaye tum?” Actress Madhuri Dixit, who was also part of the film, left a red heart eye emoji under the post.

Karima Kapoor will be next seen in the crime thriller Brown - The First Case. The Abhinay Deo directorial is based on Abheek Barua's book called City of Death.