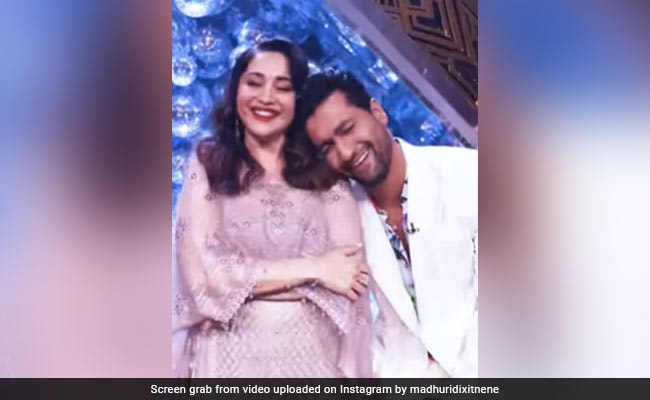 Madhuri Dixit, the Dancing Queen Of Bollywood, is everyone's favourite. Therefore, it is no surprise that even the biggest of stars want to shake a leg with the diva, given the opportunity. So, when Vicky Kaushal got the chance to dance with Madhuri Dixit, he did not let it go. The actor is appearing as a guest on the dancing reality show Jhalak Dikhhla Jaa, on which Madhuri Dixit serves as a judge. While on set, the two actors danced to the song Mere Samne Wali Khidki by Kishore Kumar. The Reels, however, features a cover by singer Sanam Puri and has Madhuri Dixit and Vicky Kaushal pulling off some charming moves.

Sharing the video, Madhuri Dixit wrote, “Lots of fun and amazing performances coming your way with very special guests. How excited are you for this weekend's episode.”

Before Vicky Kaushal, actress Tabu too danced with Madhuri Dixit. The two grooved to Lata Mangeshkar and Kishore Kumar's song Gaata Rahe Mera Dil. Sharing the video, Madhuri Dixit wrote, "It was so lovely to have you on set Tabu." She added the hashtags #monday #mondaymood #jhalakdikhlajaa10 to her post.

Meanwhile, Vicky Kaushal is getting ready for the release of his film Govinda Naam Mera. Earlier this week, Vicky Kaushal and Karan Johar, who is producing the film, announced that the movie will have a direct-to-OTT release. The announcement came in the form of a fun video that features Karan “pitching” the film to Vicky.

The video begins with Karan Johar asking Vicky Kaushal to do more fun roles before narrating the premise of the film. The producer tells a slightly shocked Vicky that his character Govinda is a background dancer, drowning in debt. He also has a wife who cheats on him and beats him up. Also in the picture is Govinda's girlfriend. An unconvinced Vicky Kaushal is given an ultimatum by Karan Johar: Govinda Naam Mera or Student of the Year 3.

Govinda Naam Mera will be released on Disney+Hotstar.