A "Historic Pic" From Sonu Sood's First Portfolio. Apparently, It Got Him Happy New Year

The throwback photo shows Sonu Sood posing in a naive way for his first professional portfolio. In the caption, he himself cracks jokes about it. Sonu Sood has surprised us once again — and this time it's courtesy one of his throwback photos. The actor said that the sepia-tinted photo was from his “first so-called ‘professional' portfolio'”. Well, fans may be surprised after seeing Sonu in the photo. We see him wearing a dark vest and posing in a naive way. Back then, Sonu thought that “there can't be a better picture than this”. His caption is humorous to say the least, where he compares his uninitiated mind with a light stand without a bulb, which features in the photo.

He captioned it, “A historic picture from the first so-called “Professional” portfolio. And I thought there can't be a better picture than this. No wonder my mind was acting like a light stand in the background which is without a bulb.”

Soon, this led to a banter between the actor and film-maker Farah Khan. Farah teased Sonu by commenting, "This photo is epic!" To that Sonu replied, "This photo got me Happy New Year (laughing emoji)." Happy New Year is a 2014 Bollywood movie directed by Farah Khan where Sonu Sood acted. The film also featured Shah Rukh Khan, Deepika Padukone, Abhishek Bachchan and Boman Irani. 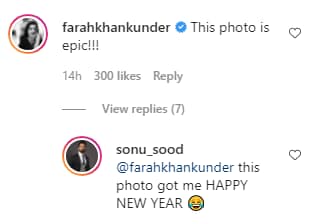 Sonu Sood is also a philanthropist who has time and again come to the aid of people through donations or by spreading awareness. Recently, he started promoting small businesses too.

But he had a fun way to do it. Here's a video where Sonu swapped places with an idli-vada vendor to encourage small businesses.

Sonu knows the perfect way to keep his followers entertained on social media. Here's a mind-boggling video where we see him doing a very difficult handstand. We are thrilled until we realise that Sonu is simply lying on the floor. To add to the humour, he wrote, "This stunt is dangerous. Kindly don't attempt without proper training"