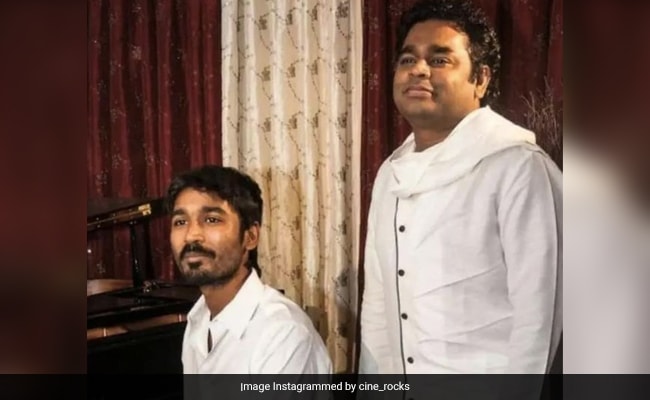 South actor Dhanush is excited as Oscar-winning music composer AR Rahman's dream project 99 Songs, hits the theatres today. Dhanush, who has collaborated with the music maestro for many of his films, shared a tweet on Friday morning. Dhanush wished AR Rahman and the team of the multi-lingual musical romance film. The actor wrote: "Here's wishing AR Rahman sir for his mega movie 99 Songs which hits theatres today. Can't wait to witness the magic of Rahman sir. Also wishing the entire cast and crew all the very best - Vishwesh Krishnamoorthy, Ehan Bhat and Edilsy Vargas." 99 Songs is a musical that marks AR Rahman's debut as a film producer. It stars newcomers Ehan Bhat and Edilsy Vargas.

Maryan and Raanjhanaa are two of Dhanush and AR Rahman's blockbuster collabs. Last year, the actor announced on social media that he crooned a song composed by AR Rahman for his upcoming Bollywood film Atrangi Re. Dhanush shared a snap on Instagram and wrote: "Had a blast singing and chatting with our very own Isai puyal AR Rahman sir."

AR Rahman, who has co-written and produced the feature film, is making his debut in both roles with 99 Songs. The celebrated composer spoke at length about how he prepared himself for his new position and what inspired him to venture into filmmaking. Speaking about the film and its music, AR Rahman said that as a creative person, it is a never-ending process. "We tweaked the score two weeks ago. Also as the film will be out in three languages - Tamil, Telugu and Hindi, the lyrics and dialogues slightly change in resonance with the culture," he added.

Many of the team members met several times to get the essence of the story right, which is why it took so long for the project to come together. Speaking about the cast and crew, AR Rahman said that he was glad to find filmmaker Vishwesh Krishnamoorthy whose approach was aligned with his. The lead pair went through a 4-week training in Hollywood.

Talking about Dhanush, he received the National Award under the Best Actor category for the 2019 Tamil film Asuran directed by Vetrimaaran. His latest release is Karnan, directed by Mari Selvaraj.