Oscars 2020: Well, Brad Pitt also greeted Leonardo DiCaprio with a hug at the Once Upon A Time In Hollywood premiere at Cannes last year. 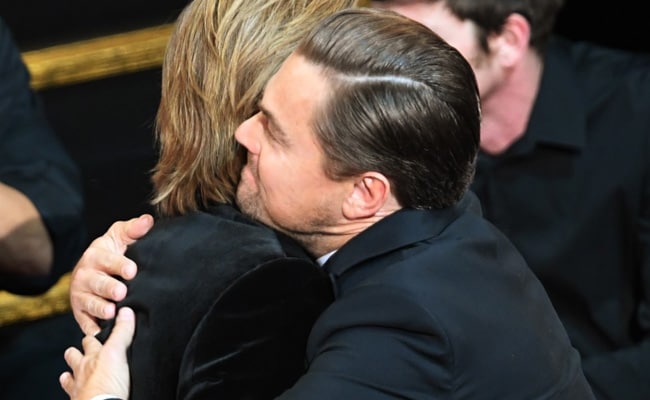 Once Upon A Time... In Hollywood, Brad Pitt was the first winner of the 92nd Academy Awards. As he got out of his his seat to collect the Best Supporting Actor Oscar, there was a case of a brief but epic hug. In the film, Brad and co-star Leonardo DiCaprio share a bromance to rival any other and it was only right that before he went up to receive his Oscar from last year's Best Supporting Actress Regina King, Brad Pitt should exchange a hug with Leonardo. There is, obviously, no question of the Internet keeping calm and carrying on. We agree with what a Twitter user said - there should indeed be a 'Best Hug' category at the Oscars: "Best hug goes to Brad Pitt and Leonardo DiCaprio". "Brad seems like a sweet man and his Leo hug confirms that in 2020 dudes rock," read another tweet while others fans could only say: "Leo and Brad's hug... I'm dead."

Brad Pitt and Leonardo DiCapro in the front row, two seats apart, and then the hug when Brad wins - oh my heart. Two of my biggest crushes in life! #Oscars

That's Academy Award winner Brad Pitt to you. The Once Upon a Time in Hollywood star picked up his first acting Oscar at tonight's ceremony with his usual charm-and a hug from costar Leonardo "LDC" DiCaprio. #Oscar2020#Oscarspic.twitter.com/fzDM3rnWqx

Brad Pitt emerges victorious over four Hollywood megastars. His first hug? Leo. What a moment, what a performance- congrats to a true Hollywood Legend #Oscars

My heart was beating so fast
And when Brad hug Leo...
I'm dead #Oscars#Oscars2020pic.twitter.com/S4W4MZviZo

Brad hugs Leo instead if his mom. #Oscars

Brad Pitt's Best Supporting Actor Oscar marks his first Academy Award for acting in a career spanning over three decades - he already has a Best Picture Oscar as producer of 12 Years A Slave.

Brad Pitt, who has left audiences and netizens impressed alike with his acceptance speeches this award season, began his Oscar speech by saying: "This is incredible, really incredible." At the BAFTAs, his speech referenced Brexit; here, he touched upon Donald Trump's impeachment trial. "They told me I only have 45 seconds up here, which is 45 seconds more than the Senate gave John Bolton this week," he joked - John Bolton, Mr Trump's former security advisor, offered to testify before the senate. Brad added: "I'm thinking maybe Quentin does a movie about it. In the end, the adults do the right thing."

Well, just so you know, Brad Pitt also greeted Leonardo DiCaprio with a hug at the premiere of Once Upon A Time In Hollywood at the Cannes in May last year. Brad and Leo have a long-standing hug history and we can't wait for more.