"A film I thoroughly enjoyed, a film quite bold, a film after which Tim was conceived," Kareena wrote in her Instagram post 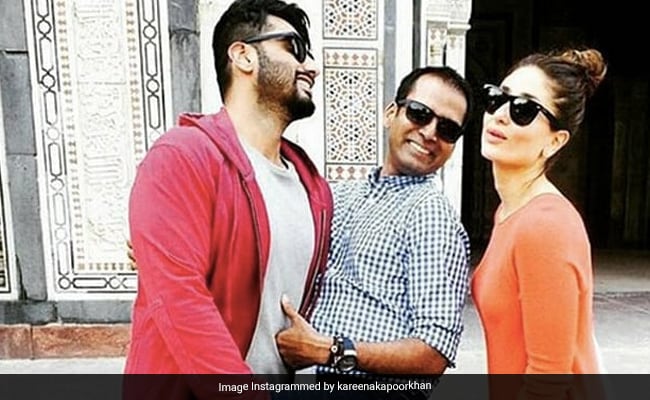 Kareena Kapoor and Arjun Kapoor's romantic-drama Ki & Ka completed 5 years on Thursday. On the occasion, both the celebrities shared separate Instagram posts dedicated to the film's anniversary and expressed their desires to work in a sequel of the film. Kareena shared a throwback picture of herself with Arjun and the film's director R Balki, on Instagram. In the picture, Kareena can be seen posing as Arjun tries to hold R Balki in his arms. In the caption of the post, Kareena shared several details about the film including the fact that her first son Taimur was conceived after the film. "A film I thoroughly enjoyed, a film quite bold, a film after which Tim was conceived, a film that must be made into a sequel... only cause I want to work with Arjun Kapoor and Balki once again... Arjun don't worry, I will continue to say chappal laooooo #5YearsOfKiAndKa," she wrote.

Fans of the actress flooded the comments section of the post with congratulatory wishes and heart emojis. "Happy 5 Years Kia," wrote one of the fans. Kia was the name of the character that Kareena portrayed in the film.

Alternatively, Kareena's co-star Arjun Kapoor also shared an Instagram post dedicated to the film. He shared a picture of himself on Instagram in which he can be seen holing a mangal sutra in his hand. The mangal sutra had a significance in the film as it marked the reversal of gender roles in the film. It was worn by Arjun who played the role of Kareena's husband. In the caption of the post, Arjun shared how the film is special to him and also expressed his desire to work in its sequel. "A piece of memorabilia from ki & ka !!! Missing the set and missing the on screen Ki... this film was personal as I chose it for my mom and it's now even more personal after working with Bebo and Balki sir... I think we need a sequel, what say Kareena Kapoor? #5YearsOfKiandKa," he wrote in the caption.

Kareena will next be seen opposite Aamir Khan in the upcpming film Laal Singh Chaddha. It has been scheduled to release on Christmas in theatres.

In terms of personal life, Kareena welcomed her second baby with her husband and actor Saif Ali Khan, earlier this year. The celebrity couple were parents to a four-year-old boy Taimur Ali Khan.