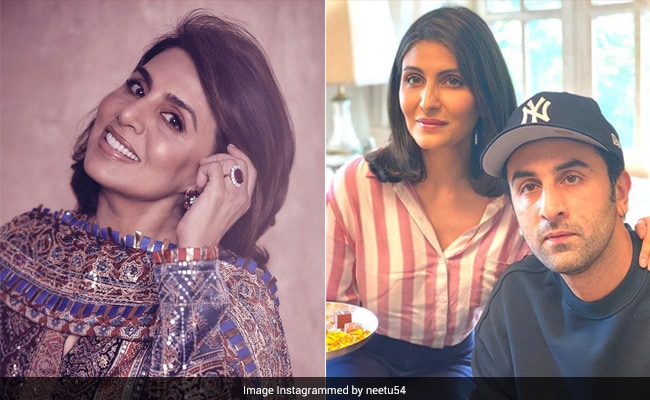 If you like reading about Bollywood's first Kapoor family, then this is a treat for you. We have learned some interesting facts about Rishi Kapoor and Neetu Kapoor's children Ranbir Kapoor and Riddhima Kapoor Sahni that you might not know of. All thanks to Neetu. Ranbir is an actor, Riddhima is a fashion designer. The actress recently spoke about her children Ranbir and Riddhima in an interview with Filmfare. We picked up some of their interesting anecdotes and have curated them for you here. Let's take you to Ranbir and Riddhima's journey.

Neetu shared, "We always discussed movies, Ranbir and myself, we discussed actors, we discussed performances, since the beginning. We've always had that relationship. That's our passion. He also discusses his films with me when he wants, though he makes his own decisions. But once in a while he also wants my take on the script."

Talking about her best Mother's Day experience with Ranbir, Neetu said, "He had just started earning, I think he was an assistant director in Black then and he had made some money and it was Mother's Day and he took me to a restaurant called Just Eat Around the Corner. It served lunches for Rs 100 or so and we had to fill the whole plate at one go. So that was my best Mother's Day as we stood in a line with a plate and I saw everyone was piling up their plate with food as you could go only once to fill the plate. And I was the proudest mother that day, as that was the first-ever lunch my son had taken me out for."

Neetu shared that Riddhima had booked a limousine to make her feel special in London when the actress went to meet her there. Talking about her fondest memory with Riddhima, Neetu said, "With Riddhima, it was in London and she was studying there and she started doing some part-time jobs and it was her own money that she was earning while studying. So, once I was going to meet her to see her during one of her vacations. When I landed, she had arranged for a Limo with her money as she wanted to make me feel special and there was champagne she had arranged for. I stayed with her in her apartment and she had all these beautiful cards all over with welcome to my home written on it and she had posted all over."

4) Ranbir was "obsessed" with GI Joe toys in his childhood

"For, Ranbir, it was GI Joe toys. He was obsessed with it. It was in stages, I guess. When he became a little older, he wanted a bike, then a car. My husband (Rishi Kapoor) said no to car, because he did not want to spoil the children. Then, after so much convincing, he (Ranbir) finally got the car when he was 18 or 19." Neetu shared.

Neetu said, "Riddhima wanted to highlight her hair at one point and I said no way, you are highlighting. She was also around 15 or 16. She wrote me such a long letter, saying mom this is the only thing I want in life, I will never ask for anything ever. Please let me do the highlights. I did not believe in highlights, because I thought it'll spoil her hair and all that. So many times they wanted something but my husband and I did not want to spoil them, so we would say no."

Meanwhile, Neetu Kapoor has Jugg Jugg Jeeyo coming up. She will be seen alongside Anil Kapoor, Varun Dhawan and Kiara Advani. The film will also feature Prajakta Kohli and Manish Paul. It is directed by Raj Mehta and produced by Hiroo Yash Johar, Karan Johar and Apoorva Mehta.