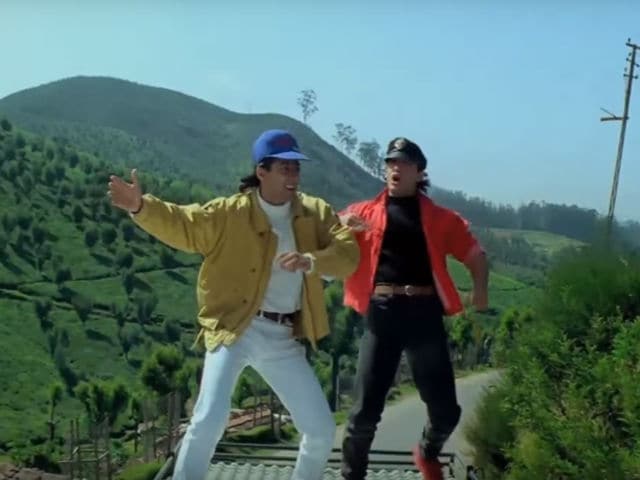 New Delhi: Action sequences on buses are sort of expected from a film featuring Salman Khan. But the 51-year-old actor has put the heavy vehicle to an entertaining use by filming song sequences on top (or inside, he's not fussy about it). Salman Khan shared a new poster of his upcoming film Tubelight, which also features his brother Sohail Khan. The Khan brothers, holding hands, are on top of a bus travelling through a lush green forest-like area. Several songs have been filmed on trains - first song which rushes to our memory is Shah Rukh Khan's Chaiyyan Chaiyyan. But, a song filmed on a moving bus seems equally challenging. Here's the latest poster from Tubelight and other times when Salman Khan took a bus ride singing in a soothing (and sometimes not-so-soothing) tune.

The new Tubelight poster is quite similar to Salman Khan and director Kabir Khan's last project together, titled Bajrangi Bhaijaan. In the film, Pawan aka Bajrangi (Salman) and Munni (Harshaali Malhotra) travel on foot, truck and bus to find her home in Pakistan. Tu Jo Mila plays in the backdrop when Pawan and Munni happily peep from the same window to see snow-clad picturesque mountains.

Ever travelled Hum Saath-Saath Hai-style singing ABCDEFGHI? You must. Prem (Salman Khan) and family drive a mini-bus to Rampur and sing a song from their childhood. The song has generously contributed in the making of jokes and memes.

Amar (Aamir Khan) and Prem (Salman Khan) meet for the first time on a bus. Their hilarious conversation aside, Amar and Prem also declare the purpose of their trip through a song Do Mastane Chale Zindagi Banaane. The passengers join Amar and Prem resulting in one epic song.

Promoted
Listen to the latest songs, only on JioSaavn.com
Visually the new Tubelight poster invokes Bajrangi Bhaijaan, the fact that Salman is with a family member brings in the Hum Saath-Saath Hai element. Will it be quirky enough to match Andaz Apna Apna style?