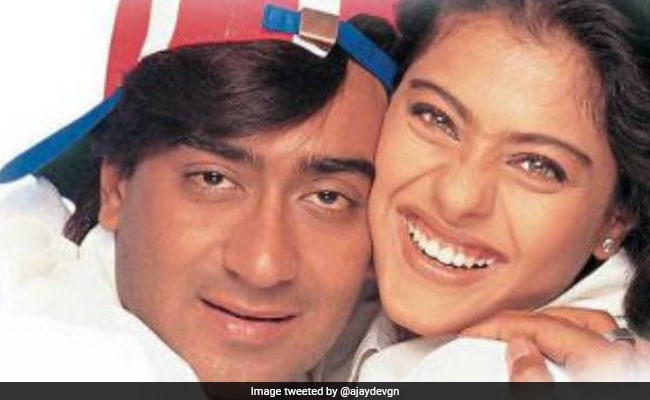 Ajay Devgn and Kajol's style of celebrating 22 years of their 1997 film Ishq will leave you in splits. But before moving forward, here's a question for you - do you remember the catchy song Neend Churayi Meri from the film? If yes, then you will totally relate to Ajay Devgn's epic post for Kajol. Quoting a part of the lyrics of the song, Ajay Devgn shared a still from the film and wrote in his Ishq-special post: "Neend Churayi Meri Kisne O Sanam? Tune, Kajol. However, Kajol, who is known for her sense of humour, once again stole the spotlight with her hilarious reply to Ajay's post. Sharing a candid photo of herself from the film, in which she can be seen sleeping, Kajol replied to Ajay: "Tumhari neend churake, dekho main kitne chain se soyi hoon." Ishq featured Ajay-Kajol and Aamir Khan-Juhi Chawla as young couples.

As  Ishq completed 22 years, Juhi Chawla also got nostalgic and shared the film's poster on social media. The pictures featured her along with her co-stars Aamir Khan, Kajol and Ajay Devgn. She accompanied her post with a special note that read: "Nostalgia... It travels in many forms, on a song, in a scent or in photographs. 22 years of Ishq!"

Nostalgia...It travels in many forms, on a song, in a scent or in photographs 22 years of Ishq!! #Ishq #22YearsOfIshq @kajol @ajaydevgn @_aamirkhan

Other than Ishq, Kajol and Ajay Devgn have worked together in Pyaar To Hona Hi Tha, Raju Chacha, Hulchul, Dil Kya Kare, U Me Aur Hum and Toonpur Ka Super Hero. They will next be seen together in Tanhaji: The Unsung Warrior. Their film is slated to open in theatres on January 10.