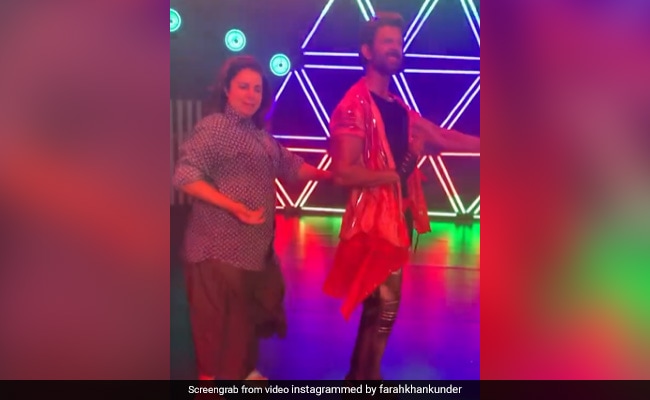 Farah Khan and Hrithik in the video. (courtesy: farahkhankunder)

Hello, can we have your attention please? The OGs Hrithik Roshan  and Farah Khan recreated the magic of their iconic song Ek Pal Ka Jeena, from the 2000 film Kaho Naa... Pyaar Hai, which featured Hrithik Roshan and Ameesha Patel. Hrithik, who starred in the song, and Farah Khan, who choreographed it, danced to the track once again and it was perfect in every sense. The way they did the hook step to the track sung by Lucky Ali has to be our favourite segment of the video that Farah Khan posted on her Instagram profile. Sharing the video on her Instagram profile, Farah Khan wrote in her caption: "This Step! 21 years still going strong! Just like Hrithik Roshan."

When Hrithik Roshan and Farah Khan come together on the dance floor, magic is bound to happen and the Internet couldn't overlook that, neither could we. The comments section was full of remarks from Bollywood stars. "Mummmyyyyyyyyyyy," Katrina Kaif wrote for Farah Khan, who has choreographed many of her hit numbers. "Legendary," wrote Kartik Aaryan and we agree.

In terms of work, Hrithik Roshan, on his birthday in January this year, announced his new project, a film co-starring Deepika Padukone, which is titled Fighter. More details about the film are awaited. He was last seen in the blockbuster hit War, co-starring Tiger Shroff and Vaani Kapoor. The same year, he also starred in the film Super 30, which released in 2019.

Farah Khan, who stepped into the Indian film industry as a choreographer, made her directorial debut with the 2004 film Main Hoon Na. She has also directed films like Om Shanti Om, Tees Maar Khan and Happy New Year. Her last production venture was Netflix's Mrs Serial Killer, starring Jacqueline Fernandez and Manoj Bajpayee. The film was directed by Farah's husband Shirish Kunder.