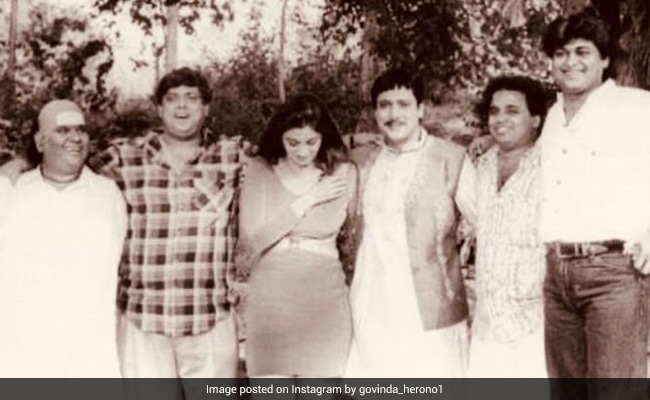 Govinda just made our Sunday better. The actor shared a priceless throwback on his Instagram profile and took us back in time. As his 1996 romantic comedy film Saajan Chale Sasural clocked 24 years on Sunday, Govinda celebrated it with a throwback from the sets of the superhit film. In the throwback picture, Govinda can be seen posing for the camera while Tabu, his female lead, looks down. Govinda and Tabu can be seen accompanied by the cast and crew of the film, in the picture. Sharing the throwback picture, Govinda wrote, "12th April 1996." He also added the hashtag "24 years of Saajan Chale Sasural" to his post. Directed by David Dhawan, Saajan Chale Sasural also starred Karisma Kapoor, Kader Khan and Satish Kaushik in leading roles. Take a look:

Govinda seems to be in a mood of throwback. The 56-year-old actor, who is currently in home with family due to the nationwide lockdown, keeps sharing throwback pictures from his blockbuster films, on his Instagram profile. On Thursday, The Hero No 1 actor shared two throwback pictures of his 1993 film Aankhen and 1999 film Anari No 1 and took us back in time. In one picture, Govinda was seen posing with a monkey on his shoulders which seems to be from the sets of Aankhen. In the second picture, the 56-year-old actor shared the poster of his blockbuster film Anari No 1 featuring Raveena Tandon. Sharing the throwback pictures, he wrote, "27 Years of Aankhen (April 9, 1993) and 21 Years of Anari No 1 (April 9, 1999). Tell me which is your favourite song from these two films of mine."

On the work front, Govinda was last seen in 2019's film