27 Years Of Aankhen, 21 Years Of Anari No 1: Govinda Celebrates With Throwback Pics

"Tell me which is your favourite song from these two films of mine," wrote Govinda 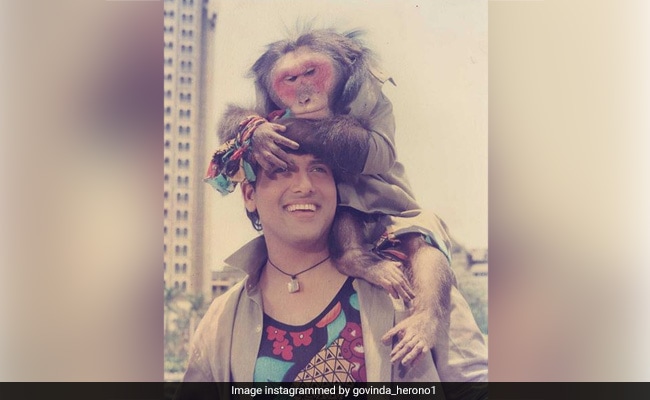 Govinda made the most out of Throwback Thursday and treated his fans to a set of priceless throwback pictures. The Hero No 1 actor shared two throwback pictures of his 1993 film Aankhen and 1999 film Anari No 1 and took us back in time. In one picture, Govinda can be seen posing with a monkey on his shoulders which seems to be from the sets of Aankhen. In the second picture, the 56-year-old actor shared the poster of his blockbuster film Anari No 1 featuring Raveena Tandon. Sharing the throwback pictures, he wrote, "27 Years of Aankhen (April 9, 1993) and 21 Years of Anari No 1 (April 9, 1999). Tell me which is your favourite song from these two films of mine." We can't wait to see Raveena's reaction to Govinda's throwback picture. Take a look at the aforementioned post by Govinda here:

Within minutes of posting, his picture was flooded with comments from his fans as they reminisced the two films. His Instafam reacted to his post with their favourite songs from his two films - the winner being O Laal Dupatte Waali Tera Naam To Bata and Angna Mein Baba.

Aankhen, which clocked 27 years on Thursday, starred Govinda in a double role along with Chunky Pandey. Directed by David Dhawan, the comedy drama was a blockbuster hit in 1993.

Anari No 1, directed by Kuku Kohli, was another blockbuster hit delivered by Govinda. In this film, Govinda shared screen space with Raveena Tandon, Aruna Irani, Kader Khan and Satish Shah among others.

On the work front, Govinda was last seen in 2019's film Rangeela Raja. He has also featured in several blockbuster films including Hero No 1, Coolie No 1, Dulhe Raja, Haseena Maan Jaayegi, Jodi No 1 and many more.