2.0 - Akshay Kumar On 'Amazing' Rajinikanth: 'He Puts Entertainment In Every Line'

"It's amazing how you give him one dialogue and he changes it into an epic dialogue," said Akshay Kumar 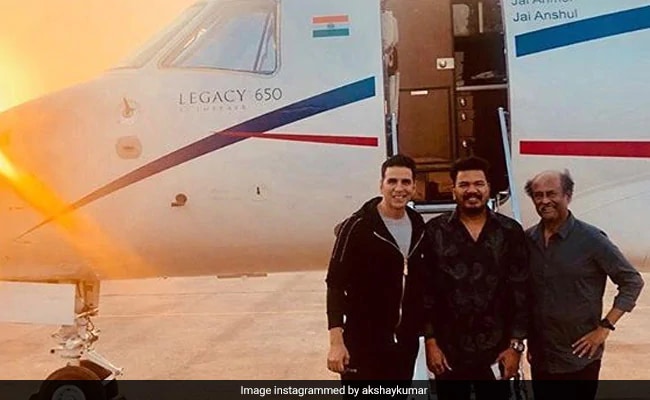 Akshay Kumar and Rajinikanth are a lethal duo (courtesy akshaykumar)

Akshay Kumar shared his experience of closely working with megastar Rajinikanth for 2.0recently and had everything nice to say about the Thalaiva. Speaking to news agency PTI, the 51-year-old actor said that he would converse with veteran actor in Marathi because that's the connect they shared. "We used to talk in Marathi. He is a Maharashtrian and I also know the language. He is a great man. It's amazing how you give him one dialogue and he changes it into an epic dialogue. He puts entertainment in every line," PTI quoted Akshay as saying. Directed by S Shankar, 2.0 marks Akshay's first collaboration with Rajinikanth. 2.0 releases on Thursday.

In a previous media interaction, Rajinikanth had said 2.0 actually belongs to Akshay and when the Bollywood khiladi was asked about it recently, he said 2.0 is an all-and-all Rajinikanth film. "He (Rajinikanth) is just being humble. It's very much his film because the title is 2.0. I can't be that. He is 2.0. He is just being kind and nice to me. I respect him for that. It's very much his film," PTI reported Akshay as saying. Referring to his villainous role, Akshay added: "I am the Amrish Puri of the film."

Just days ahead of 2.0's release, Akshay had shared a priceless piece of rare photo, featuring the core team of 2.0 - director S Shankar, Rajinikanth and himself. Referring to the religious concept of Trimurti comprising Brahma the creator, Vishnu the preserver and Shiva the destroyer, Akshay Kumar wrote: "Here's Team 2.0 - the creator Shankar Sir, the protector Rajini Sir and the destroyer (yours truly) ahead of the press meet in Hyderabad today."

Here's Team 2.0 , The creator #Shankar Sir , the protector Rajini Sir and the destroyer (yours truly ) ahead of the press meet in Hyderabad today!

In 2.0, Akshay Kumar plays the antagonist - a destructive birdman like creature while Rajinikanth reprises his roles as that of Dr Vaseegaran and his creation robot Chitti.