Why these AAP members are protesting against their party 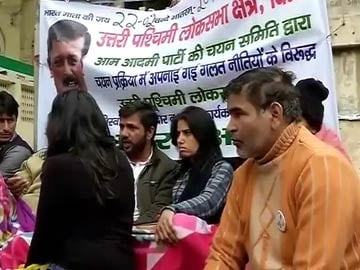 New Delhi: Five members of Arvind Kejriwal's Aam Aadmi Party are sitting on an indefinite fast outside the party's Hanuman Road office in Delhi in protest against the alleged lack of transparency in ticket distribution.

The five AAP activists, all of whom are from the capital, have been sitting on a dharna since February 22, and have vowed to continue their protest till corrective action was taken. Their main grouse is that the ticket-distribution exercise put in place by the party's top brass was opaque, and that decisions were being taken behind closed doors.

To drive home their point, they cited the case of former Delhi minister and Mongolpuri lawmaker Rakhi Birla, who was reportedly being considered for the Delhi North-West (Reserved) constituency. "Mr Kejriwal had once said that no sitting MLA will get a Lok Sabha ticket. Why is her name being considered?" asked Manoj Kumar, one of the five activists sitting on the dharna.

The five protestors, who insist that they have the support of a larger group of 10-15 activists, want transparency in decision-making, as promised by the party's founders.

Mr Kejriwal, however, told reporters that his party will not be giving Lok Sabha tickets to sitting lawmakers. "We will continue to follow transparent methods. Some people will be upset with us since we are not giving tickets to all. They will understand soon," he said.

Promoted
Listen to the latest songs, only on JioSaavn.com
The AAP has declared that it will field its candidates in 300-350 constituencies in the Lok Sabha polls due by May. The party has already come out with its first list of 25 names, including eminent psephologist Yogendra Yadav (Gurgaon), former journalist Ashutosh (Chandni Chowk), poet-turned-politician Kumar Vishwas (Amethi), activists Medha Patkar (Mumbai North-West) and Anjali Damania (Nagpur).