'Rahul Gandhi a challenge for Amethi, not me': BJP's Smriti Irani 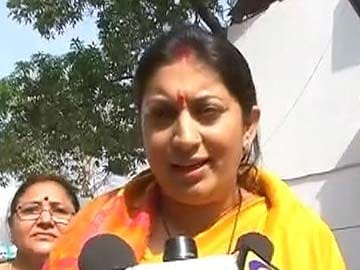 Amethi: Television actor-turned-politician Smriti Irani wasted no time in attacking Congress Vice President Rahul Gandhi as she arrived in Amethi in Uttar Pradesh today to campaign for the Lok Sabha polls. The day-long visit is her first to the high-profile constituency from where she was picked by her party, the BJP, last week to take on Mr Gandhi.

"I don't consider Rahul Gandhi a challenge as he himself has emerged as a major challenge for the people of Amethi," Ms Irani said. Amethi, which Mr Gandhi has held since 2009, votes on May 7, the penultimate phase of the nine phase general election. (India Votes 2014: full coverage)

With the 38-year-old BJP leader's entry, the contest in Amethi has turned into a triangular one; the Aam Aadmi Party (AAP) had earlier fielded poet-turned-politician Kumar Vishwas from the seat.

"I am going to contest election against Congress and not against Congress' B-team that is being led by the AAP. The broom is being held by the hand and that was evident when the hand and broom together formed a government in Delhi," Ms Irani said yesterday, dismissing Mr Vishwas as a potential threat.

Promoted
Listen to the latest songs, only on JioSaavn.com
Her candidature, widely speculated upon, was announced earlier last week after a meeting of the BJP's central election committee. (BJP picks Smriti Irani to take on Rahul Gandhi in Amethi)

She is reportedly seen in the BJP as a candidate who can put up a credible fight in Amethi against Mr Gandhi. Ms Irani became a household name with a popular Hindi serial that stopped airing in 2008. BJP sources say she has little to lose as she still has four years left in the Rajya Sabha.