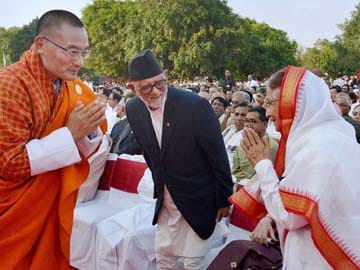 New Delhi: In an unprecedented move, India's new government invited all of its neighbours for the swearing in at the President's house. Termed as India's zero problem neighbour, Bhutan's Prime Minister Tshering Tobgay told NDTV "the swearing in was like a mini SAARC summit".

Applauding the decision of India's new prime minister Narendra Modi, the Bhutanese PM said that Mr Modi has set new standards for SAARC (South Asian Association for Regional Cooperation) and it shows how important India feels South Asia is for itself.

The attendance of all the SAARC nations, plus Mauritius, reflects the keenness of all countries to be together in celebrating formation of a new government of one of its members.

He also alluded that such steps would help reinvigorate SAARC, as the multi-national cooperation body looks at a summit later this year in Kathmandu.

All the SAARC nations extended an invitation to Mr Modi to visit their respective countries. The invitation was accepted but the dates would be decided later.

Promoted
Listen to the latest songs, only on JioSaavn.com
Mr Tobgay added that friendship between India and Bhutan is a role model for the region.