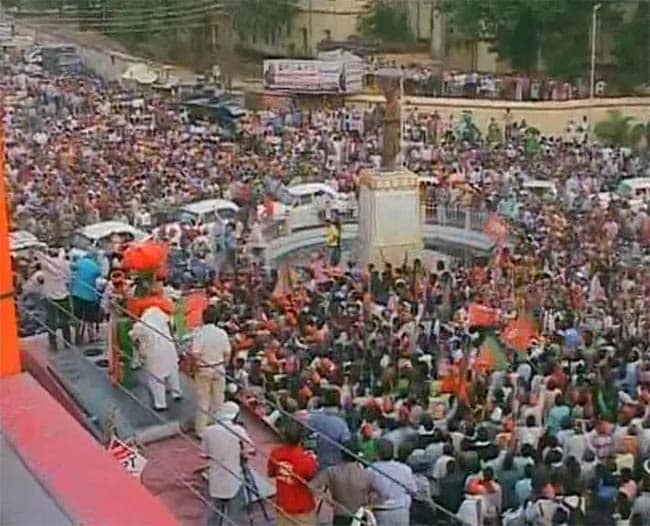 Varanasi: Narendra Modi, the BJP's prime ministerial candidate, is driving through Varanasi, the huge crowds providing a show of strength at a time when his party has alleged that the Election Commission wrongly disallowed him from holding a rally in the heart of his constituency. (See Pictures)

Before his drive-through, Mr Modi gave a searing speech on the outskirts of the city and alleged that his political opponent, the Congress, is behind what his party has described as "a ban" on his campaigning in Varanasi. (Massive Crowds Throng Narendra Modi's Roadshow in Varanasi: Latest Developments)

The Election Commission has defended its decision to refuse permission for Mr Modi's rally in Beniabagh, declaring that intelligence alerts had warned of security concerns. "The lives of ordinary people and leaders would have been at risk," said Chief Election Commissioner VS Sampath. He also reprimanded the BJP for its unmitigated attack on the Commission, which, he said, "deplores attempts to cast aspersions on a constitutional body" that could "cause long-term damage to the independence and neutrality" of the agency. (Watch: Varanasi Debates Decision of District Magistrate Pranjal Yadav)

The BJP has questioned the neutrality of the Commission. "Men in constitutional offices need to be bolder. Timid men can dwarf high offices," BJP leader Arun Jaitley said today.

Along with other leaders like Amit Shah, he led protests against the Election Commission this morning at the city's famous Banaras Hindu University. (In Varanasi, BJP's Day of Protests)

The BJP had planned three Modi events today. While permission for the rally was denied, prayers on the banks of the Ganga and a meet with 150 citizens at a local hotel was sanctioned. But the BJP alleges the clearances came through at 2 am this morning, which forced them to cancel both programmes.  (Modi Rally Permission Was Given, Then Withdrawn)

Promoted
Listen to the latest songs, only on JioSaavn.com
Varanasi votes on May 12 on the final day of the staggered national election. Ajay Rai of the Congress is up against Mr Modi and Mr Kejriwal.