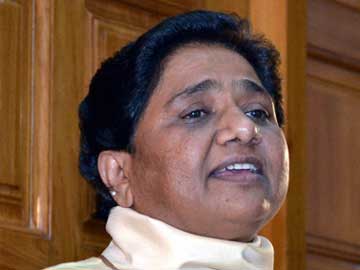 Alleging that BJP has traditionally been against backward communities and minorities, Mayawati said BJP has realised its poor showing in the elections and now playing "dirty tricks" to influence the remaining two phases of polling in UP.

"'Neechi rajniti' does not mean politics of backward communities. Modi has distorted the statement to link with caste to play backward card for political gains," Mayawati told reporters in Lucknow.

"Which school did Modi go to? Either teacher was not good or he did not take interest in studies. How else can one interpret 'neechi rajniti' as politics of backward caste.

Either this is the case or he is being mischievous," she said.

Referring to controversial statement of yoga guru Baba Ramdev regarding scheduled castes women, she asked, "If Modi is such a well-wisher of backward community and scheduled castes, why is he silent on Ramdev's statement?"

Questioning silence of Congress and SP on Modi's retort, Mayawati alleged that Congress leaders are not reacting much on Modi as they have realised that they are finished in Uttar Pradesh.

"They (Congress) have realised that they are finished in UP and did not react well on Modi remarks as they think it would be good if it damaged BSP," she said.

She said BJP had brought down the VP Singh government which had agreed to BSP's demands of implementing the Mandal Commission recommendations. "BJP has traditionally been against backward communities and minorities. How can they claim to friends of backward community?" she asked.