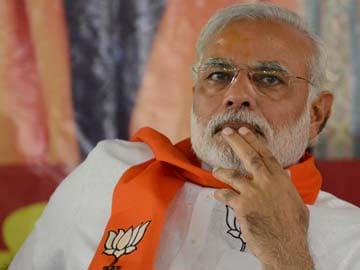 Narendra Modi has said in poll affidavit that he is married

Vadodara: Narendra Modi, the BJP's prime ministerial candidate, has acknowledged for the first time that he is married. In a poll affidavit that he filed on Wednesday as the BJP's candidate from Vadodara, Gujarat, he has written the name "Jashodaben" in the column for spouse.

Mr Modi, who has ruled Gujarat since 2001, has left the field for "spouse" blank in four assembly polls. This time he says he has no information about his wife's assets and other details; the Gujarat Congress says his nomination should be rejected for this.

Congress leader Digvijaya Singh tweeted, "Modi accepts his Marital Status. Can Women of this Country trust a Man who stalks a woman, deprives his wife of her right? Vote against Modi (sic)." The comment refers to 'Stalkgate', or the alleged spying on a woman in 2009, allegedly on the orders of the Gujarat government. (Elections: full coverage)

Soon after, Mr Modi's older brother Somabhai Damodar Modi, explained in a statement that their family had married him off very young, but he walked away because he wanted to serve the country. "What happened 45-50 years ago should be seen in the context of a poor and superstitious family," he said, urging Indians to vote for his brother.

Jashodaben, 62, a retired school teacher, recently told a newspaper that they were married when Mr Modi was 17 and split three years into their marriage. She said since then "we have never been in touch".

Jashodaben reportedly draws a monthly government teacher's pension of Rs. 14,000 and lives with a brother in a village in western Gujarat.

Mr Modi has been silent on his marital status while rising through the ranks in the Rashtriya Swayamsevak Sangh or RSS, the BJP's ideological mentor, an organisation in which celibacy is expected.

Promoted
Listen to the latest songs, only on JioSaavn.com
Opinion polls predict that the BJP will get the most seats in the election.(Elections schedule)