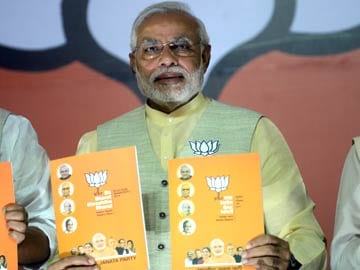 New Delhi: Opposition Bharatiya Janata Party (BJP), widely tipped to form the next government, said in its election manifesto on Monday it would encourage foreign direct investment but appeared to close the door to global retailers eyeing the country.

The party also set out its Hindu nationalist leanings, vowing to explore building a Ram temple at the site of the Babri mosque in Ayodhya in Uttar Pradesh that was torn down by zealots over two decades ago, putting a deeply controversial issue back in play. (BJP manifesto: development, good governance and 'Ram Mandir')

It made a commitment to withdrawing a special autonomous status accorded to Jammu and Kashmir, India's only Muslim-majority region, which many in the BJP believe prolongs ambiguity over the status of a territory claimed by Pakistan.

The party said it would revise India's nuclear doctrine "to make it relevant to challenges of current times", but gave no details. A central tenet of India's current doctrine is "no first use" of nuclear weapons.

The party said it would seek friendly relations with neighbours but take a "strong stand and steps" when required.

Opinion polls have said the BJP will emerge as the single biggest party in the five-week election that began on Monday, but may fall short of the majority required to rule. A BJP-led National Democratic Alliance (NDA) government is the most likely outcome, they have said. (Elections: full coverage)

In its 52-page programme, the BJP accused the left-leaning Congress, which has led the country's ruling coalition United Progressive Alliance (UPA) for the past decade, of "weak and spineless" leadership. (Read full manifesto)

"Instead of creating a socio-economic and political paradigm of governance drawn from the civilisational consciousness of India, the leaders tried to follow whatever was being practiced in this or that Western country," it said.

The BJP said it would link welfare programmes introduced by the Congress to asset creation, and would review the country's strong labour laws.

Promoted
Listen to the latest songs, only on JioSaavn.com
On foreign investment, it said: "Barring the multi-brand retail sector, FDI will be allowed in sectors wherever needed for job and asset creation, infrastructure and acquisition of niche technology and specialised expertise."

The party promised a massive emphasis on reviving India's creaking infrastructure with plans to build 100 new cities, a high-speed rail network, and a 10-year-plan to roll out low-cost housing to every Indian family.
© Thomson Reuters 2014