'Heads of Government Eligible for A1 Visas': US Ducks Question on Narendra Modi 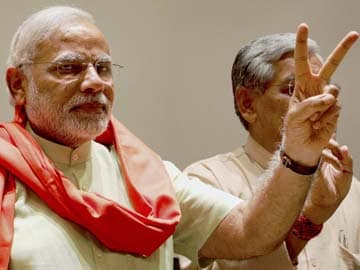 Washington: Continuing to maintain silence on granting a visa to BJP leader Narendra Modi, US has said the heads of state and government are eligible for A1 visas and no individual automatically qualifies for an American visa. (India Votes 2014: Full coverage)

"Heads of state and heads of government are eligible for A1 visa classification under the INA (Immigration and Nationality Act). No individual automatically qualifies for a US visa," the State Department Spokesperson, Jen Psaki, told reporters yesterday. (Read: Barack Obama May Have to Congratulate Narendra Modi this Week)

"US law exempts foreign government officials, including heads of state and heads of government from certain potential inadmissibility grounds," Psaki said when asked about the possibility of issuing visa to Narendra Modi, BJP's Prime Ministerial candidate.

Refusing to go into any greater level of detail, Psaki refrained from responding to direct questions on Modi visa issue, except for saying that the United States looks forward to working with new Indian government. (Narendra Modi would enjoy diplomatic immunity if he becomes PM: US Congressional report)

"We don't talk about visa applications. We are looking forward to working with the new Indian government when they are elected. But I am not going to speculate on that given, obviously, the results haven't been announced yet," she said.

Promoted
Listen to the latest songs, only on JioSaavn.com
The results of the 16th general elections of India are scheduled to be announced on May 16.

The exit polls has predicted BJP, led by NDA to form the next government in India. (Exit Polls: Numbers Stack Up in Favour of BJP-Led NDA)