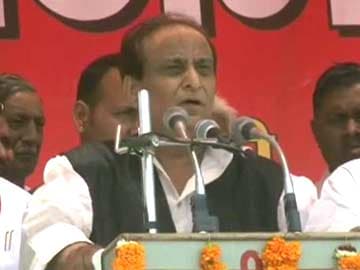 The Congress was quick to slam Mr Khan. "The Election Commission should take actions against that person who talk against society and want to break it. You cannot break the country for votes," said Congress leader Rashid Alvi. (Threats, personal attacks and Kargil: hate speeches under scrutiny)

While Mr Shah said he will give his explanation to the Election Commission and request for a review of the decision, Mr Khan sounded defiant. Speaking in Rampur on Saturday, he said he "merely stated the facts" and called himself a "true nationalist". He also said the poll panel's step was "premature" and alleged that he was not given a chance to explain his stand.

In Ghaziabad on Tuesday, Mr Khan sparked a controversy by saying the Kargil war was won by Muslim soldiers. The panel has said that despite a notice sent to him, he was "still making derogatory and inflammatory statements." (Muslims won Kargil for India: Azam Khan's comment under scrutiny)

Mr Khan has alleged that he is facing a ban and criminal charges as the Election Commission "had to strike a balance as they were anyway proceeding against Amit Shah."

Mr Shah, a close aide of the BJP's prime ministerial candidate Narendra Modi, has already been booked for talking about "revenge" for the communal violence that tore through Muzaffarnagar last year. Mr Shah delivered the controversial speeches in Bijnor and Shamli, in the riot-scarred western UP region.