Eggs thrown at Chiranjeevi after his comments on Narendra Modi 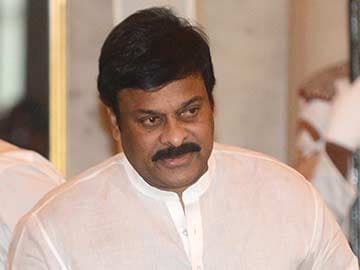 Chiranjeevi, who was addressing a rally at Koneru Centre, stopped his speech for some time after the incident.

However, the police managed to bring the situation under control and the minister continued his speech. The cops later nabbed two suspects.

During his speech earlier, Chiranjeevi said, "Modi is a tyrant. He is a Hitler. He had been deliberately sidelining a number of senior BJP leaders, including former Prime Minister Atal Bihari Vajpayee and party veteran L K Advani."

"BJP is a communal party and YSR Congress Party has roots in criminal ideology," the actor-turned-politician alleged.

Targetting BJP's prime ministerial candidate over his remark that "Congress-free India is need of the hour", Chiranjeevi said, "No one can root out the Congress from the country and many parties which tried to do so have perished. The people will never forget the work Congress has done for the country. BJP, TDP and YSR Congress party cannot harm the Congress."

People are well aware of who is responsible for the division of Andhra Pradesh and the BJP, TDP and YSR Congress parties should own up the responsibility for it, he added.

The Congress leader said that in Andhra Pradesh, although senior leaders left the party, the young and fresh leaders would work wonders in the Lok Sabha as well as assembly polls in the state.

He accused the TDP and YSR Congress Party of spending a lot of money to ensure victory in the elections.