Country will be ruined with riots if Narendra Modi becomes PM: Mayawati 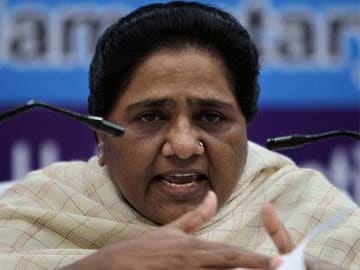 Kanpur: Asking people to refrain from voting in favour of BJP, BSP supremo Mayawati today alleged that if the BJP came into power and Narendra Modi became the Prime Minister, the country would "stand ruined" with communal riots.

Addressing an election rally in the city's Rail Bazaar in Kanpur this afternoon for her party's candidates from Kanpur, Akbarpur and Misrikh seats, the Dalit leader took on BJP and its prime ministerial candidate Narendra Modi headlong.

Do not waste your votes by dividing it between Congress and Samajwadi Party, because it will directly benefit the BJP.

And, if that happens, BJP and Modi will come into power and "the country would stand ruined with communal riots" akin to the one in Gujarat in 2002, Mayawati alleged.

In her 30-minute speech, the BSP leader asked the Muslim electorate to play a decisive role in ensuring victory for her party and stopping BJP from coming at the Centre.

Attacking the SP-led state government, Mayawati alleged that in their regime, there is a rule of criminals, mafia and the corrupt and claimed that in her UP government law and order was maintained and no communal riots took place in that period.

The BSP leader also claimed that no other party has fielded as many Muslim and Brahmin candidates in the 80 Lok Sabha seats in the state as her party has.

Our party does not believe in discrimination unlike other parties, she alleged and added, BSP has fielded 19 candidates from the Muslim community and 21 from the Brahmins.

Promoted
Listen to the latest songs, only on JioSaavn.com
Congress and BJP both are parties for the rich and the capitalists and so if you want a party for the poor, vote for us (BSP), she said.