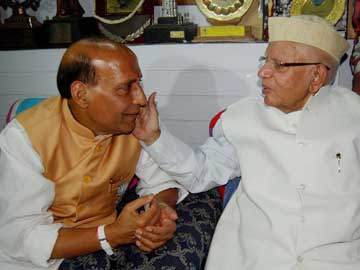 Lucknow: Senior Congress leader ND Tiwari today expressed his backing for BJP President Rajnath Singh who is contesting from the Lucknow parliamentary seat in Uttar Pradesh. The support adds to the continuously changing political equations in favour of the BJP, right in the middle of the general election.

"Woh Raja hain (he is Raja)... he came today... samarthan toh hoga hi (he will have my support)," Mr Tiwari, 88, said after meeting Mr Singh at his residence in Lucknow. The senior Congress leader opted out of contesting the Lok Sabha polls after being denied a ticket from Nainital in Uttarakhand.

The BJP chief, who touched the Congressman's feet and sought his blessings, added, "When I made my first speech after being elected to the Vidhan Sabha in UP for the first time... he (Tiwari) came up to me and said 'you are the future of this state'."

The mutual admiration apart, the meeting between the two leaders, though, is being viewed more as a result of political necessity than anything else.

Mr Singh, 62, is reportedly facing a lukewarm response from the two-lakh-odd Brahmin community in Lucknow, critical to his win and part of the BJP's traditional upper-caste votebank. Matters have been compounded by the Congress and the Samajwadi Party which have fielded two strong Brahmin leaders - ex-state president Rita Bahuguna Joshi and ex-IIM faculty member Abhishek Mishra respectively - from the seat. (India Votes 2014: full coverage) In the scenario, the BJP would be hoping to benefit from Mr Tiwari, a prominent Brahmin leader and three-time UP chief minister, in wooing voters from the community.

Promoted
Listen to the latest songs, only on JioSaavn.com
While Mr Singh's rivals are hoping that the Brahmin-Dalit combination may help them get a large chunk of minority votes, the BJP chief's attempt would be to ensure a division of the same vote, in the event of the influential upper caste refusing to vote en bloc for him.

For Mr Tiwari, the association is an attempt at staying relevant, especially after being overlooked by his party for these elections. The veteran, who has accused the Congress of "neglecting" him after serving like a "loyal soldier for 60 years", had already showed his dissent earlier this week by backing former Uttarakhand chief minister Bhagat Singh Koshiyari, who is the BJP's candidate from Nainital.