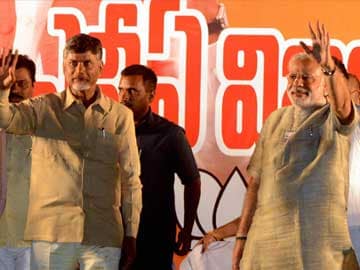 Tirupati: BJP's prime ministerial candidate Narendra Modi on Wednesday alleged that the Congress backstabbed Seemandhra and promised to develop it as the number one state in the country.

Claiming that he has a clear plan for the development of Seemandhra, Mr Modi said the same can be implemented only if people bring the TDP-BJP to power in the state.

Mr Modi said the long coastal belt of Seemandhra had the potential to become the cargo hub of East Asia while the gas reserves in the Krishna Godavari basin can make the country self-sufficient in energy. (Elections: full coverage)

Urging the people to make Mr Naidu the chief minister, he said Mr Naidu could develop Seemandhra into a hardware capital the way he made Hyderabad a software capital.

"After petroleum we make maximum imports in electronic goods. We can make mobiles and laptops in the country," he said. (Differences forgotten as Narendra Modi, Chandrababu Naidu put up joint show)

Mr Modi recalled than when Gujarat was formed it also faced the problem of developing a state capital. He said Seemandhra can develop a new capital which can make Delhi look smaller. He suggested that Mr Naidu should form a team to study and develop the new capital on the lines of smart cities made by some countries.

Mr Modi appealed to Seemandhra people to reject scamsters. "This is an important election for you. You will not just be electing a new chief minister and a new government but you will be deciding the future of this state," he said.

"It is for you to decide whether you want golden Andhra or scam Andhra. If you make it scam Andhra, even the new government in Delhi can't help you," he added without naming any party.

Promoted
Listen to the latest songs, only on JioSaavn.com
The BJP leader said he had neither indulged in corruption nor allowed others in his government to resort to corruption. "I will make those who looted India and Andhra accountable," he said.

Elections to 175 assembly and 25 Lok Sabha seats in Seemandhra are scheduled on May 7.