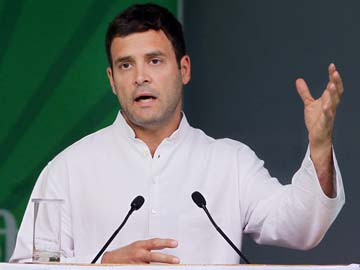 Congress Vice President Rahul Gandhi speaks at the release of the partys election manifesto titled Your Voice Our Pledge at AICC Headquarters in New Delhi.

New Delhi: Expressing confidence that UPA will form the government again, Rahul Gandhi today asserted that BJP's campaign "balloon" will burst like 'India Shining' in 2004 as he warned that Narendra Modi's coming to power would be damaging for the country.

Rahul, along with Congress president Sonia Gandhi and Prime Minister Manmohan Singh, cautioned that Mr Modi's ideology was against the idea of India and the Congress will fight in a determined manner to ensure that this ideology is defeated.

Releasing the party's manifesto in Delhi, they debunked the opinion polls which are predicting a dismal show by the UPA in the upcoming Lok Sabha polls and said everybody will be "surprised" when the election results come in. (Read: Don't go by opinion polls, says Sonia as Congress releases manifesto)

On the upbeat campaign of NDA, Rahul said, "Just like the 'India Shining' balloon exploded... I can say certainly the balloon will explode."

He said this will be particularly true in Uttar Pradesh where 80 seats are at stake.

He said BJP has the ability of carrying out campaigns like 'India Shining' but all should keep in mind that that campaign "evaporated" when the results came in 2004.

Attacking BJP's Prime Ministerial candidate, Narendra Modi, Rahul said he had nothing against him as an individual but was opposed to his ideology which is against the idea of India.

"Modi represents an ideology which is exclusive," he said.

Rahul was asked whether he agrees with the statement of the Prime Minister about two months back that Mr Modi's coming to power will be "disastrous" for the country.

Replying, the Congress vice president said, "The PM is a wise man and on most of the issues I bow to him. I tend to agree with his wisdom."

He went on to add that it was an issue of an "individual" but the "ideology which is questioning the idea of India.

Individuals may have personal likes or dislikes but the real danger is the ideology."

Rahul along with Sonia Gandhi debunked the opinion polls which project a dismal show for the Congress.

Rahul continued speaking in the same vein, saying that in 2009 Congress was projected to suffer badly and a NDA wave was predicted.

Promoted
Listen to the latest songs, only on JioSaavn.com
In Uttar Pradesh, Congress was projected to get 5 seats (but it got 22 seats).

"You did not believe us then. When the results come (this time), you will be surprised," he added.