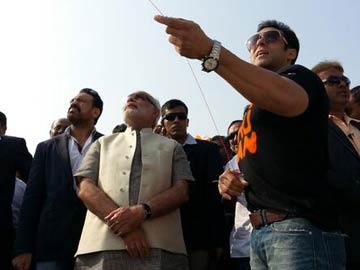 Salman Khan with Narendra Modi on the kite-flying festival of Uttarayan or Makar Sankranti in Ahmedabad (January 14, 2014)

They are part of a long list of 2,500 guests for the oath-taking ceremony, which will be held in the gravelled forecourt of Rashtrapati Bhavan on May 26.

All Lok Sabha and Rajya Sabha MPs will be invited, which alone add up to 777. These MPs have been invited by Rashtrapati Bhavan. However they cannot bring their spouses, according to these sources.

Former presidents Pratibha Patil and APJ Abdul Kalam are also invited. Outgoing prime minister Manmohan Singh will be there along with some members of his cabinet.

Mr Modi's mother Hiraben and his three brothers are also expected to attend the event, though it is not yet confirmed.

The incoming prime minister can invite upto 20 guests, while ministers who will be taking oath can bring upto four guests each.

A number of BJP leaders from Gujarat are also expected to arrive in Delhi for the function, scheduled to be held at 6 pm on Monday.

From the BJP's ideological mentor Rashtriya Swayamsevak Sangh or RSS, Suresh Soni is expected to attend the ceremony.

The Bharatiya Janata Party (BJP) has been limited to 1,250 guests, while another 1,250 guests will be invited by the president. The party will also invite the chief ministers of all National Democratic Alliance (NDA) ruled states.

This is the first time leaders from SAARC nations have been invited for the oath-taking ceremony of an Indian prime minister. The external affairs ministry today said eight heads of state and government were invited and seven have confirmed, while a response from Pakistan was awaited.

Rashtrapati Bhavan will also show the ceremony live on its website.

Promoted
Listen to the latest songs, only on JioSaavn.com
Mr Modi will be the third Indian prime minister to take oath in the open forecourt instead of the ceremonial Ashoka Hall after Chandra Shekhar (1990) and Atal Bihari Vajpayee (1998).