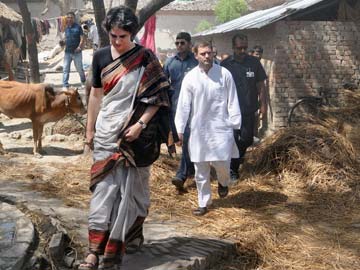 Rahul Gandhi and Priyanka Gandhi Vadra during their visit to Amethi after Congress' poll debacle.

New Delhi: At a time when the Congress' epic defeat in the national election has brought Rahul Gandhi's leadership under harsh scrutiny, his close aides have launched a detailed defence.

"We were able to stop the downslide of the Congress party and we helped restore the image of the UPA and Congress," said a close aide of Rahul, adding that the damage could have been far worse if he had not taken charge of the campaign in January. (Rahul Gandhi, Smiling, Says He Accepts Responsibility)

Rahul, 43, and his mother, Congress president Sonia Gandhi, both offered to resign after the Congress won just 44 seats across India, compared to the BJP's 282. But leaders in the party's highest decision-making body rejected it, in what critics called scripted drama. (Also Read: Sonia and Rahul Gandhi Offer to Resign, Congress Says No)

The rout has led to calls for "brutal introspection" in the party. On Thursday, Congress leaders Milind Deora and Priya Dutt criticized what they called the disconnect between the leadership and those on the ground. (Congress' Milind Deora, Priya Dutt Appear to Criticize Leadership)

"Field party work & electoral battles are key to comprehend ground realities. This should form the basis for leadership posts in Congress," Mr Deora tweeted in a comment seen as an attack on Rahul Gandhi's advisers.

A Congress leader today said the attacks "are not against Rahul's aides but Rahul himself."

The leader, who is close to Rahul, pointed out that the party could not win enough seats despite getting 19 per cent vote share, which was almost the same as what the BJP got - 18.5 per cent - when it won 122 seats in the previous election in 2009.

Team Rahul Gandhi's fight-back comes as a section of the Congress has resumed its demands for a larger role for his sister Priyanka Gandhi Vadra. (Rahul Gandhi and Priyanka Vadra's First Visit to Amethi After Congress' Electoral Debacle)

"Even before elections, I have been saying Soniaji, Rahulji and Priyankaji need to work together as a team," Mr Thomas, the outgoing Food Minister, said.

"When we look at Priyanka, we see Indira Gandhi, our great leader," he added.

Promoted
Listen to the latest songs, only on JioSaavn.com
Priyanka, 42, managed the campaigns of her mother, Congress president Sonia Gandhi, and brother Rahul in Rae Bareli and Amethi, the only seats that the party won in Uttar Pradesh. In the last lap of the election, she emerged as the party's chief firefighter against a litany of attacks from the BJP and Narendra Modi.

On the clamour for her in the party, Congress MP Shashi Tharoor said, "It's a bit like deciding best actress for someone who has not auditioned for a role."