PSEB Class 10 Results 2018: To Be Released @ Pseb.ac.in, Indiaresults.com; Rank, Merit List On May 8
PSEB 10th Results 2018: According to a press release by PSEB, the Class 10 results will be released on May 9 on the official websites while the merit list or the PSEB rank list will be announced on May 8. Punjab School Education Board (PSEB) had earlier assured that the PSEB Class 10th Result 2018 will be released before May 10. Punjab Board or PSEB had held class 10 annual exams in the month of March this year for over 4.5 lakh candidates.

The statement from the board said that the PSEB chairman Manohar Kant Kalohia shared this information to the media that individual results of the candidates will be released on May 9 after noon.

According to Mr. Kalohia, the results will be published on websites: Pseb.ac.in, Indiaresults.com.

Indiaresults.com is the official results partner portal of the board.

PSEB Class 10 exam results were declared on May 23 last year. Like this year, the Punjab Board officially announced the merit list and the topper's name a day before. The individual marks were announced a day after this.

Last year the Punjab Board class 10 results were marred with the controversy surrounding less passing percentage. 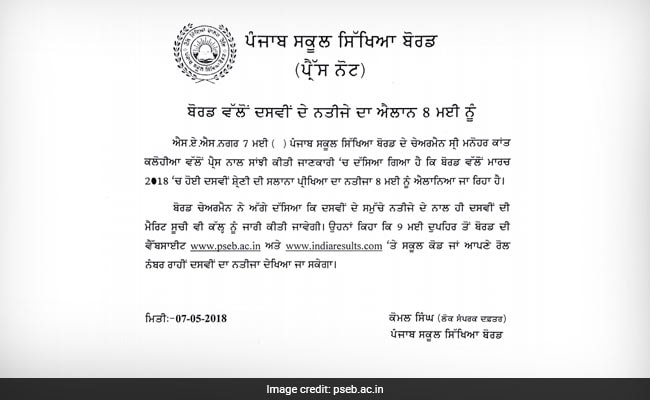 A total of 3.30 lakh students had appeared in the examination, of which 1.90 lakh students passed the exam, while 45,734 students failed with a passing per cent of 57.

After the PSEB class 10 results were declared last year, state Chief Minister Amarinder Singh expressed dismay over the "poor" results in which over 40 per cent of the students failed and then issued instructions to Education Minister Aruna Chaudhary to prepare a blueprint for raising the standards of learning in the state.

The chief minister, on last year, also directed the finance department to make all necessary funds available to the education department for undertaking urgent measures to improve the quality of education.

The Punjab Board announced class 12 results on April 23 this year.

The candidates may follow these steps to check their PSEB Class 10 results:

Step 3: You will be directed to a third party website, hosted by Indiaresults.com

Step 4: Enter exam roll number and any other requisite details

Maharashtra Board To Declare SSC Class 10th Result This Week

National Aptitude Test In Architecture (NATA) Phase 2 Over; What’s Next