Last year, on May 7, on a Sunday morning, when Muhammad Navas, Secretary of Vadi Huda Trust and his friends came out of the Mosque after offering the morning prayer, they saw a huge crowd along with vehicles in front of the mosque.

NEET 2018: Kerala Mosque Does It Again, Hosts NEET Aspirants And Waiting Parents
New Delhi: Last year, on May 7, on a Sunday morning, when Muhammad Navas, Secretary of Vadi Hira Trust and his friends came out of the Mosque after offering the morning prayer, they saw a huge crowd along with vehicles in front of the mosque. After enquiring to some families who were present there, the people from the trust, which operates the Mosque opposite the Sivagiri School, got to know that the people came there from distant places to write the NEET exam.

They saw the families tired and searching for food and water.


People from the Vadi Hira trust and some locals got into action. They invited all the waiting parents who were standing outside the centre in scorching heat to trust office and then to the mosque and made all the arrangements for food and water. The parents sat there witnessing the Muslims attending their afternoon prayer and left when their children came out after finishing the exam.

It happened again this year, but with a difference: The trust people and the locals were prepared to host more than 1,200 NEET aspirants - including the students from Tamil Nadu - and their parents this year. Apart from that, more people and institutions were involved in helping the visitors this year.

The students were allotted centres in nearby Thottumukham Sivagiri School and Chalakkal Amal Public School.

"Since we were aware of the examination," according to Abdul Rahoof Ibn Rahim, a student activist from Aluva, "we had already made arrangements in nearby homes and shops."

Rahim also said in a Facebook post that youth from Malayankadu, Keeramkunnu and Ajantha villages led the activities to host the visitors. 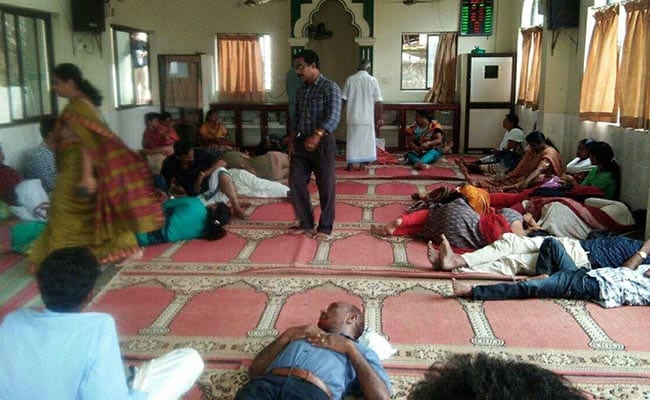 After getting to know about the development, Masjidul Azhar from nearby village Chalakkal also made arrangements for the visitors.

"Anything that may benefit the larger human goodness can be done within a mosque. This is a great thing about Islam," a representative of Masjidul Azhar which hosted the waiting parents told Manorama News.

This heartwarming incident of kindness provided several parents of wards who had gone inside the mosque with a new experience of human compassion.

CBSE organised NEET 2018 examination yesterday for more than 1.3 million students at 2255 centres in 136 cities across the country. According to officials, nearly one lakh candidates, including many from neighbouring  state Tamil Nadu, appeared for the national level medical entrance test in 39 centres in 10 districts of Kerala amid tight security.