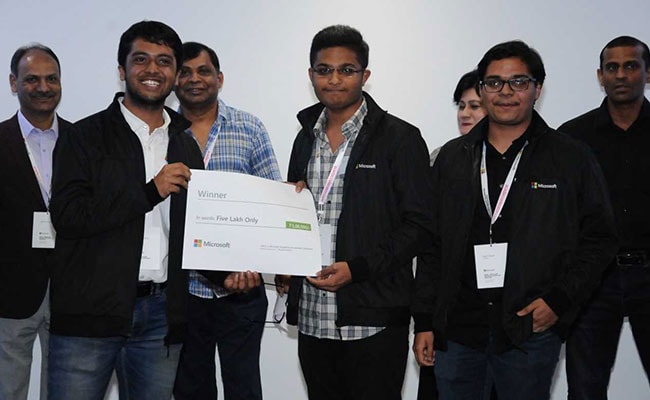 'UAVs for Disaster Management' by IIT Madras emerged winner of a challenge under Microsoft's Academia Accelerator programme here on Tuesday. The award winning project aims to solve the issue of lack of systems for accessing accurate information by creating an end-to-end autonomous system, to provide precise information about where exactly the people are stuck, with the use of UAVs which are powered with AI and Computer Vision.

The event brought together Computer Science faculty, Microsoft leaders and employees, several industry influencers and students from top engineering colleges of India who showcased innovative ways of building state of the art technology to predict or manage natural disasters better.

For making a Mixed Reality app that makes basic tasks like communication, navigation and current status monitoring easy for rescuers, the team from IIT Guwahati was judged the first runner up in the competition, Microsoft said.

The IIT Jodhpur team's Internet of Things (IoT)-based solution that acts as an early warning system and takes precautionary measures on detection of disasters was placed third in the competition.

The winning teams will receive technical and educational support through the AI for Earth grantee community and each winning team will also be awarded $5,000 in Azure credits from AI for Earth.

Launched in July 2017, AI for Earth is a $50 million, five-year commitment from Microsoft to put AI at work for the future of the planet.

Academia Accelerator Showcase builds on the best through mentor support, publishing support and pitch support provided and eventually provides the opportunity for the best among India's student developers to hone their CS skills further.