Human Rights Day is observed every year on 10 December - the day the United Nations General Assembly adopted, in 1948, the Universal Declaration of Human Rights.

Universal Declaration of Human Rights or UDHR is the most translated document in the world, available in more than 500 languages, says United Nations. 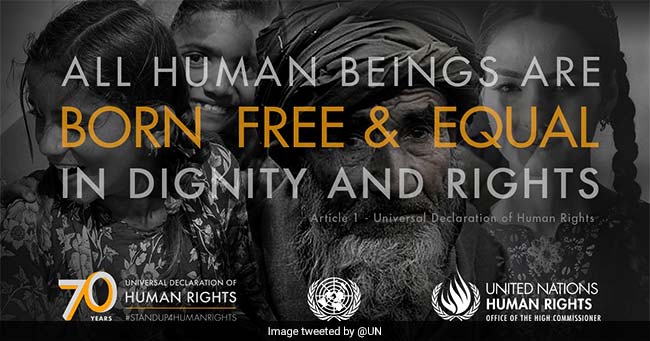 Human Rights Day is observed every year on 10 December

Drafted by representatives of diverse legal and cultural backgrounds from all regions of the world, the UDHR sets out universal values and a common standard of achievement for all peoples and all nations. It establishes the equal dignity and worth of every person.

Respect for #HumanRights is at the heart of development & peace. Without it, we can't achieve #GlobalGoals.


"The Universal Declaration of Human Rights empowers us all. The principles enshrined in the Declaration are as relevant today as they were in 1948. We need to stand up for our own rights and those of others. We can take action in our own daily lives, to uphold the rights that protect us all and thereby promote the kinship of all human beings," un.org says.


UDHR was adopted by United Nations General Assembly at its third session on 10 December 1948 as Resolution 217, when, of the then 58 members of the United Nations, 48 voted in favor, none against, eight abstained, and two did not vote.

"All human beings are born free and equal in dignity and rights." On the 70th anniversary of the @UN Universal Declaration of #HumanRights, see why the articles are still as relevant today as they did after WWII: https://t.co/QC1IQqgWc5 #Standup4HumanRights


The preamble of UDHR ends with this:

"Now, Therefore THE GENERAL ASSEMBLY proclaims THIS UNIVERSAL DECLARATION OF HUMAN RIGHTS as a common standard of achievement for all peoples and all nations, to the end that every individual and every organ of society, keeping this Declaration constantly in mind, shall strive by teaching and education to promote respect for these rights and freedoms and by progressive measures, national and international, to secure their universal and effective recognition and observance, both among the peoples of Member States themselves and among the peoples of territories under their jurisdiction".


Today we celebrate the 70 years of the Universal Declaration of Human Rights. By defining equal dignity and worth of every person, it empowers us all. #standup4humanrights pic.twitter.com/L4XXP0iMiW