SAFAR said Delhi's Air Quality Index was recorded as 350, which falls in the 'very poor' category with PM2.5 as the lead pollutant. 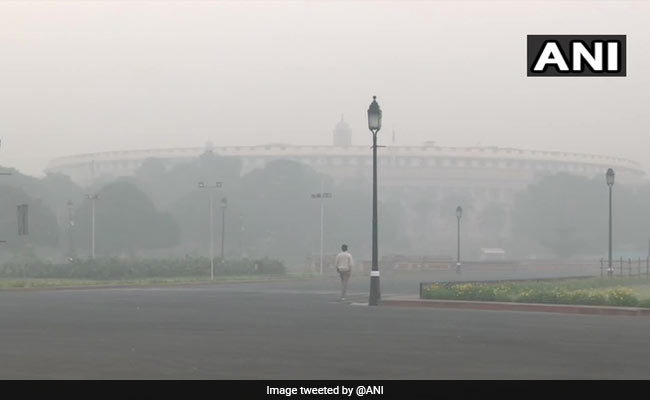 Air quality in the national capital remained in the 'very poor' category on Sunday but the contribution of stubble burning to Delhi's air came down to two per cent, authorities said.

Ministry of Earth Sciences' forecast body SAFAR said the city's Air Quality Index (AQI) was recorded as 350, which falls in the 'very poor' category with PM2.5 as the lead pollutant.

It said that though light showers will bring some respite, the air quality will again deteriorate from Tuesday due to poor ventilation conditions.

"Since wind direction is mainly from eastern side and moderate rain is expected, the AQI will improve significantly and touch moderate category for Monday and then again degrade to poor category for next two days.

"The SAFAR effective fire count was observed as 815 but as winds are not favourable and rain is expected, the stubble contribution today will be just two per cent, down from 14 per cent yesterday," it said.

According to the Decision Support System (DSS), developed by the Indian Institute of Tropical Meteorology, Pune, approximately 2-12 per cent contribution in PM2.5 over Delhi is likely from biomass burning on Sunday and this contribution will decline significantly on Monday owing to easterly winds.

It said that the lower wind speed and low mixing layer height were inhibiting dispersion along with moderate stubble intrusion.

According to the data from the Indian Agricultural Research Institute (IARI), there were just 14 farm fires in Punjab and no such incident was recorded in Haryana and Rajasthan.

In a steep rise on October 15 and 16, as many as 1,948 farm fires were recorded compared to 1,795 incidents which occurred in an entire month till October 14.

On October 16 alone, a total of 741 crop residue burning incidents were recorded, out of which Punjab recorded 429, Haryana had 176, UP had 121, Rajasthan had two and Madhya Pradesh had 13 fires.

Stubble burning in neighbouring states significantly contributes to the air pollution in Delhi.