The doctors of Lok Nayak Hospital, which is governed by the Maulana Azad Medical College (MAMC), went on strike on Tuesday to protest against the alleged attack on two of their colleagues by relatives and attendants of a patient. 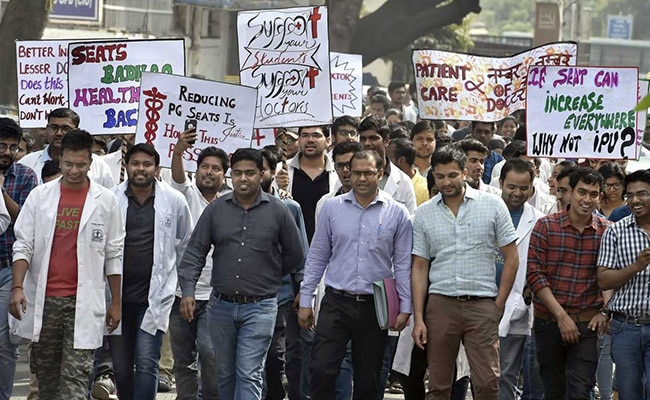 New Delhi: The strike by resident doctors of a Delhi government-run medical college and hospital over an alleged assault on two doctors entered its third day today, even though Health Minister Satyendar Jain assured them of security.

The doctors of Lok Nayak Hospital, which is governed by the Maulana Azad Medical College (MAMC), went on strike on Tuesday to protest against the alleged attack on two of their colleagues by relatives and attendants of a patient.

Representatives of the doctors, MAMC dean and medical director of LNJP Hospital met Mr Jain last evening to work out a solution.

"The resident doctors are still on strike, but we working hard to ensure patients do not suffer. Besides routine operation, we haven't really allowed anything else to get affected," the hospital's Medical Superintendent J C Passey said.

"Specialised operations are taking place and OPD is also running," he said.

"It was decided civil defence personnel will be deployed at the LNJP Hospital as per requirement, and in other Delhi government hospitals wherever there is security deficit," he said.

It was also decided that the proposal to install security cameras in hospitals will be "expedited".

"Besides, the minister also directed that a medical superintendent shall convene a meeting of hospital staff and resident doctors every month to look into the grievances and take feedback," he said.

Mr Passey said all leaves of doctors have been cancelled as "mandated by the rules".

During the meeting, Mr Jain asked the health secretary to issue suitable instructions and directions via the secretariat in view of the strike. It was also decided that the number of visitors or attendants with patients be restricted and for this a suitable policy is to be made by the government, an official said.

Meanwhile, resident doctors at the Centre-run Safdarjung Hospital also continued their strike on the second day today, protesting the reduction of 30 post-graduate seats due to "administration lapses".

They are demanding the resignation of the Principal of the Vardhaman Mahavir Medical College (VMMC).

Promoted
Listen to the latest songs, only on JioSaavn.com
Due to the strike, the emergency and OPD services have been affected, doctors said.

"Our workload has increased since the new emergency block has come up and seats are being reduced because of which the patient care is being compromised," said Anubhav Sangwan, president of the resident doctors association.
Comments
Delhi hospitalSafdarjung Hospital