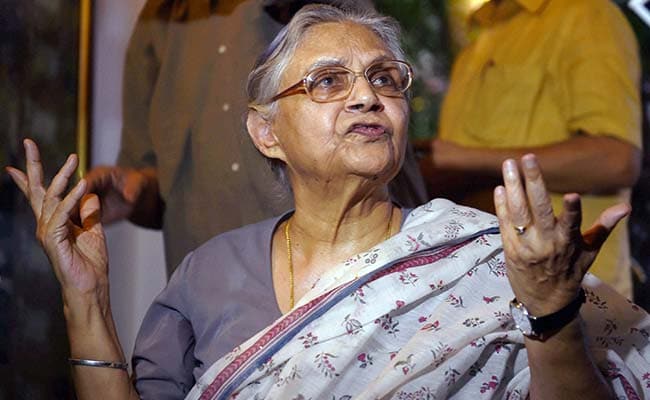 New Delhi: Former Delhi Chief Minister Sheila Dikshit on Thursday hit out at Delhi Congress Chief Ajay Maken, saying she was disappointed with his style of functioning, as he "does not consult and reach out to party workers". "I am disappointed with Ajay Maken that he does not consult (with anyone), he does not reach out to anybody. In democratic politics, most important thing is reaching out," Ms Dikshit told IANS on being asked why she thought senior leaders in the party were not happy with Delhi Congress chief.

In a setback to the Congress ahead of the April 23 civic polls, former Delhi Congress chief Arvinder Singh Lovely and former Youth Congress leader Amit Malik quit the party and joined the BJP on Tuesday.

Barkha Singh on Thursday quit as the party's women's wing chief in Delhi. She also hit out at Vice President Rahul Gandhi and Ajay Maken.

On being told that if she had campaigned in Delhi for the MCD elections, it would have been better for the Congress, she said: "That's for the party to decide."

Asked if the party had invited her, she replied "No. They could have, that's up to them, if they decide not to, then I don't have anything to say at all. I have never campaigned for MCD elections."

Asked if she was miffed with Delhi Congress' functioning, she said: "I am not angry with the party, I just want the party to be a little more active and a little more inclusive."

Earlier, on April 3, former Delhi legislator Amrish Gautam quit the Congress and joined the BJP, while former Congress Minister AK Walia threatened to quit over distribution of party tickets for the April 23 civic polls in Delhi.

"Walia also raised concerns, but he went back on it. Asked if he was quitting, she said: "Not to my knowledge".

Promoted
Listen to the latest songs, only on JioSaavn.com
Asked about Congress' prospects in MCD elections, she said: "MCD has been ruled by the BJP for the past 10 years. It has been a very abysmal performance. The city is looking dirty and all the things that are responsibility of the municipality has not been fulfilled."

"The AAP also is in trouble because it hasn't impressed the people of Delhi with the work that it has done and the Shunglu Committee report has damaged its reputation very severely. So, under these circumstances the Congress should do well. Congress has a good record of administration," she added.