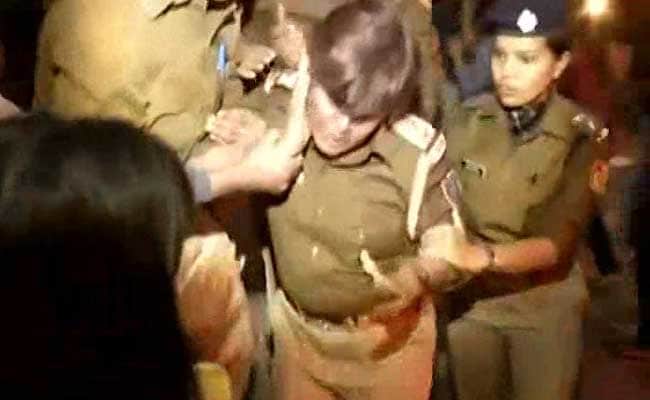 A large number of police personnel were outside the Ramjas College to control the protesters.

New Delhi: Dramatic scenes of students clashing, pulling each-other's hair, some bleeding, were seen outside Delhi's Ramjas College this evening -- a day after a seminar featuring JNU student leader Umar Khalid got cancelled. Sources said around 20 students and at least one teacher were injured in the clashes. So were some journalists who got caught in the violence. Protests had been in progress outside the Ramjas college all evening by groups who were for and against the cancellation of yesterday's programme.

The talk was called off by the college after students affiliated to the ABVP, a youth group linked to the BJP, gathered to hold a protest outside the college. The Akhil Bharatiya Vidyarthi Parishad had contended that Mr Khalid -- who had been named in a sedition case a year ago along with Kanhaiya Kumar -- talks of "dividing the country". The seminar, hosted by the College's literature society, was titled "Culture of Protest".

Scuffles had started earlier in the evening when students against the cancellation had gathered outside the college to protest. They were not allowed to begin their march and eyewitnesses said fights broke out over the issue. The group affiliated to the ABVP then came out of the college onto the road, where the other group was already present, leading to more scuffles.

As the police filed a case and said "Legal action will be taken," both the ABVP and the AISA - the All India Students' Association, which dominates the JNU students' body - have denied that they started the violence. "We are not goondas.., they spat on us," Said Yogith Rathi of the ABVP, who is also the president of the Ramjas College students' union.

Promoted
Listen to the latest songs, only on JioSaavn.com
Activists of the AISA who had been at the college yesterday and wanted to hold protests against the cancellation said they had been manhandled and locked inside the seminar room - a charge the ABVP has denied.

The college authorities have refused to comment on the matter, but sources say the administration is not planning to investigate Monday's alleged vandalism or today's ruckus.