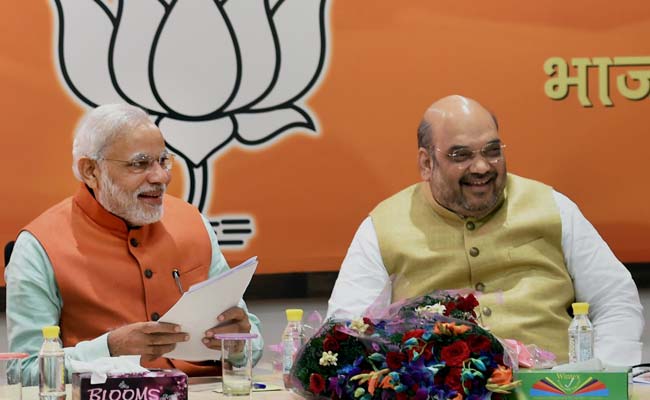 New Delhi: The formula has worked in multiple elections now and the BJP will only tweak the template for Delhi, which the party hopes to add to its kitty in next month's assembly elections.

The Narendra Modi-Amit Shah team will script the campaign with the former playing star campaigner and the latter, chief strategist. The party has announced that its state election strategy remains unchanged - no leader will be projected as presumptive chief minister and the BJP will bank completely on PM Modi's appeal.

He will address at least two to three rallies per day and the number could be increased to seven, one in each Delhi parliamentary constituency, sources said. All seven seats are held by the BJP after a clean sweep of Delhi in the national elections last May.

Sources said the controls of the campaign are firmly in the hands of party chief Amit Shah, who has set up a team of 150 members that will monitor the party's election management work at the booth level. One party leader, assisted by ten workers will be in charge of each booth and Mr Shah's brief is simple - ensure the BJP candidate wins that area.

The Delhi BJP's IT cell, a team of 100 people, is meanwhile prepping to launch an aggressive campaign on social media. The party's radio campaigns have already been airing for some time now, targeting the Aam Aadmi Party (AAP) and its chief Arvind Kejriwal, seen as the biggest threat to the BJP.

In elections held 13 months ago, AAP had made a dream debut winning 28 seats in the 87-member assembly and upsetting what had hitherto been a straight BJP vs Congress contest. It resulted in a hung house with the BJP winning 31 seats - 32 along with an ally - four short of a majority.

Promoted
Listen to the latest songs, only on JioSaavn.com
Elections will be held in Delhi on February 7 and results will be announced on February 10.