"The incident took place at around 12.40 pm. In a CCTV footage, the man can be seen shooting himself with his service carbine," said Deputy Commissioner of Police (New Delhi) Madhur Verma. 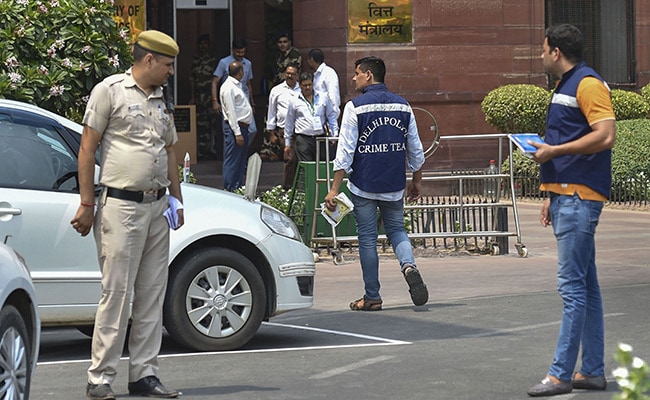 Police investigate the constable's death outside the Finance Ministry

A head constable of the Rajasthan Armed Constabulary (RAC) deployed outside the Union Finance Ministry office in New Delhi allegedly shot himself dead with his service weapon on Tuesday, police said.

Jai Narain (48), a resident of Jhunjhunu city in Rajasthan, was posted as guard near gate number 2 of the North Block, they said.

The North Block houses the Ministry of Finance and the Home Ministry, among others.

"The incident took place at around 12.40 pm. In a CCTV footage, the man can be seen shooting himself with his service carbine," said Deputy Commissioner of Police (New Delhi) Madhur Verma.

Initial probe revealed that during his duty-break, Jai Narain went to a gallery at the North Block and spent some time there. After a while, he slowly walked towards the parking area and sat under a tree before shooting himself with his service weapon, the officer said.

He was rushed to a hospital nearby where the doctors declared him brought dead.

No suicide note was found from the spot, the officer added.

Prima facie, it appears that he was under depression. However, the exact cause behind him taking such an extreme step is being ascertained, the DCP said.

Police have ruled out the possibility of any work-related stress in this case.

The body has been sent for postmortem and will be handed over to his family after it is completed.

Jai Narain's family has arrived from his hometown. He is survived by wife and two sons, police said.