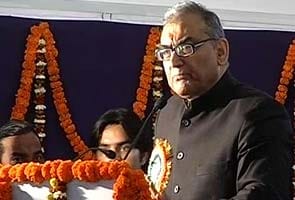 In an e-mail to the Maharashtra Chief Minister Prithviraj Chavan, he warned of "legal consequences" if the CM failed to act.

"I will deem it that you as CM are unable to run the state in a democratic manner as envisaged by the Constitution to which you have taken oath and then legal consequences will follow," Katju said.

He demanded that the Chavan immediately order suspension, arrest, chargesheeting and criminal prosecution of the police personnel responsible for arresting the women allegedly on the ground of hurting sentiments.

Promoted
Listen to the latest songs, only on JioSaavn.com
"To my mind it is absurd to say that protesting against the bandh hurts religious sentiments. Under Article 19 of our Constitution, freedom of speech is guaranteed fundamental right. We are living in a democracy, not a fascist dictatorship. In fact, this arrest itself appears to be a criminal act since under sections 341 and 342, it is a crime to wrongfully arrest or wrongfully confine someone who has  committed no crime," he said.

The two Mumbai women were ordered by a court to 14 days in jail for their Facebook post. They were bailed within hours of being arrested after paying two Rs. 15,000 bonds.